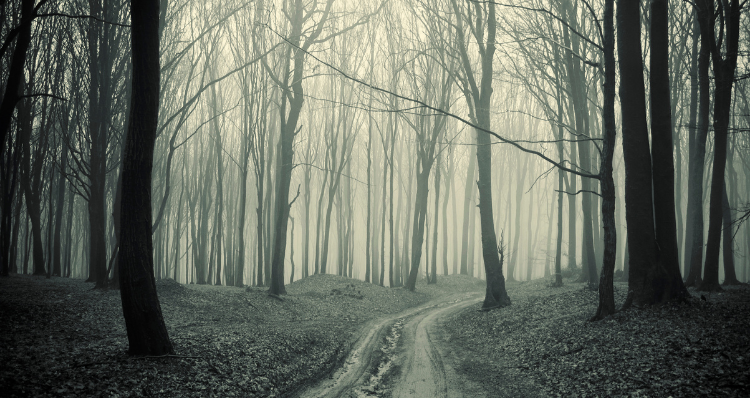 From hotels offering ghastly pasts to a supernatural roadside attraction, our Oregon and Southwest Washington communities are filled with stories of real-life hauntings. To celebrate the season, we rounded up a few of our favorite supposedly haunted sites throughout the region—from haunted hotels to supernatural roadside attractions. Read on, but don’t blame us if you have a hard time getting to sleep tonight!

Situated on lawned gardens along the Columbia River in Hood River, this manor-like hotel was built in 1904. Today, the historic destination is uniquely decorated and offers rooms with en suite bathrooms, flat screen TVs, and various amenities like fireplaces and river views. But while the hotel features great views and cozy ambiance, there are rumors of the supernatural floating underneath the surface.

Many visitors have reported strange occurrences at the hotel, including the smell of cigar smoke wafting through the halls, furniture being barricaded from the inside of rooms with no one inside, and various apparitions. Ghostly residents include a man wearing a coat and top hat, a lady in white, and a child who lingers on the ground floor where a pool used to be. 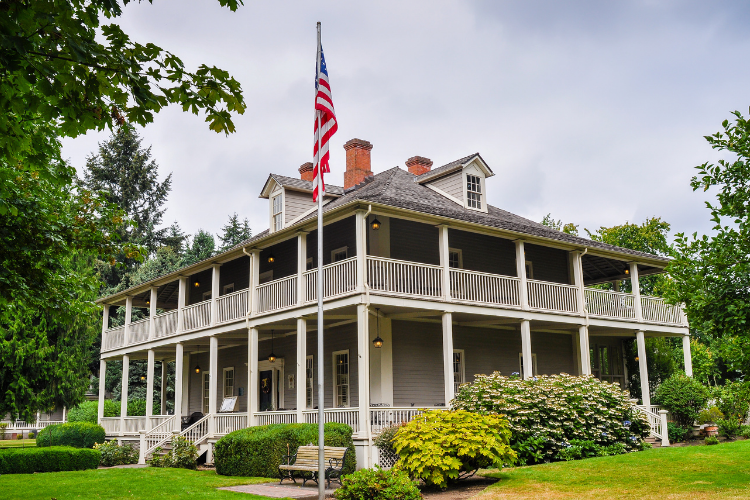 Located on the north bank of the Columbia River, Fort Vancouver is a National Historic Site that has a rich cultural past spread over four unique sections: a frontier fur trading post, soldier’s barracks, the Pearson Air Museum and the McLoughlin House.

While many are drawn to Fort Vancouver for the history and educational opportunities, the area has garnered a bit of a spooky reputation over the years, particularly Officer’s Row located near the park. This seemingly quaint neighborhood features 21 stately Victorian mansions where officers stationed at the Fort would live with their families. Today, the homes have been refurbished into local businesses and townhouses, many of which are supposedly haunted. Current residents and visitors have reported unexplained cold spots, disembodied faces in the windows, phantom footsteps, and even being touched by unseen hands. And these spirits seem to be coffee lovers too as fresh coffee brewed in these buildings seems to disappear without a trace!

The Slocum House, listed on the National Registry of Historic Places, is located in downtown Vancouver. This two-story Victorian was built in 1867 and boasts a unique and airy event space with wooden floors, high ceilings and lovely natural lighting. Today, many choose to hold their weddings, community or corporate meetings, conferences, and other important events within the historic walls.

But while the event venue has become a backdrop for some of Vancouverites’ happiest memories, something paranormal seems to haunt the small apartment in the building. Strange as it may sound, the ghost who haunts this portion of the house dislikes having anything placed on top of the appliances—particularly the fridge. Whenever the current resident places anything on top of the fridge and leaves the room, he finds the object on the floor when he returns. There have also been reports of strange shadows, dark figures and, when the house was used as a community theater venue years ago, sightings of the past owners stopping by to watch performances.

In downtown Portland, many tourists, visitors and residents have no idea that a series of 150-year-old tunnels lie beneath their feet. These tunnels connect the basements of the city’s oldest buildings to the Willamette River and were first used as a way to transport goods from cargo ships to the inner city without having to deal with traffic. But, unbeknownst to many, the tunnels had another, more sinister use.

While sailing was a popular profession in the late 1800s, it was a fairly dangerous job. Many feared death by disease or debilitating injury and, as a result, many sea captains would find themselves with empty positions they needed to fill before heading back out to sea. That’s where “Shanghaiers” came in. Men looking for good money would look for abled-bodied men who were alone and kidnap them, and then moving them through the tunnels unnoticed. The kidnapped men would awake on board a ship out at sea and would be forced to work in exchange for food. During the height of its operation, an estimated 2,000 people a year were shanghaied through Portland’s underground tunnels. According to experts, many unfortunate souls never made it out alive and are rumored to still haunt the tunnels today.

The Heceta Head Lighthouse and lightkeeper’s home are perched on a cliff 205 feet above the powerful ocean waves in Yachats. This working lighthouse, which cast its first light in 1894, has the brightest light on the Oregon coast and is the most photographed lighthouse in the country—though visitors may not know about the lighthouse’s ghostly sightings.

The old lightkeeper’s house, where a bed and breakfast now operates, is said to be haunted by a spirit named Rue. She was the wife of the former lighthouse keeper and the mother of a little girl who drowned after falling from the cliffs and is believed to be buried somewhere on the grounds. Several guests have reported the smell of her rose perfume or seeing an unexplainable imprint on their bed that they didn’t leave.

While many coastal travelers report seeing apparitions inside the many lighthouses dotting the Oregon coast, there have also been some sightings of a paranormal entity on Highway 101, the highway lining the entire coast from the Columbia River to the California border.

According to local legend, drivers often encounter a man wrapped in bloody bandages—aptly nicknamed “The Bandage Man”—who loves jumping into passing vehicles on their way into Cannon Beach. Others have seen him simply walking down the side of the road or along the beach, dragging his bloody bandages with him.

Nestled in the quaint town of Bend in Central Oregon, the Sparrow Bakery is a destination for great coffee, pastries, pies, freshly baked bread and more. But while many only know their Scott Street location as their favorite place to grab breakfast, they might not be aware that it has a slightly spooky history!

Before it was a bakery, the building on Scott Street was the payroll office for Bend Ironworks where workers would once cast parts for woodwork machinery. While nothing sinister ever happened (that we know of) at the payroll office, bakery workers still report hearing and seeing strange things within the building. Often, they hear loud crashes coming from the rear of the store but find nothing has moved when they go to check. They also say doors open and close by themselves and have heard ghostly laughter coming from the back room. 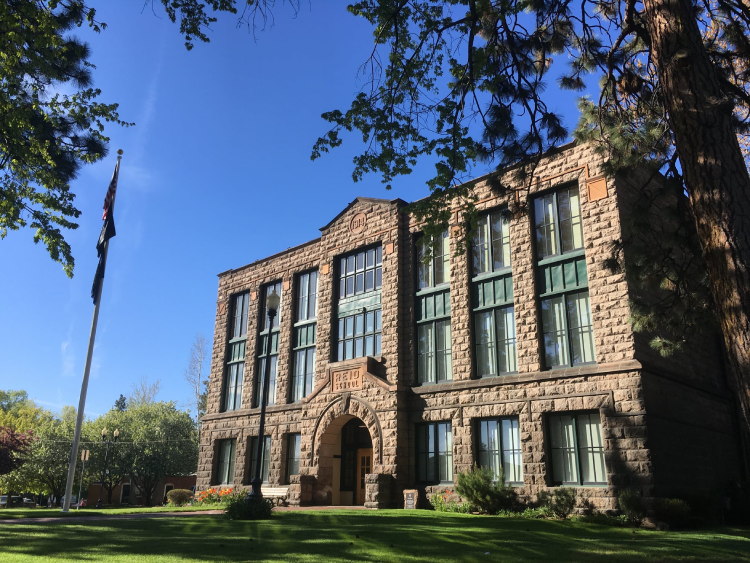 Located in the old Reid School—which is listed on the National Register of Historic Places—the Deschutes Historical Museum houses artifacts, documents and other historical material relating to the history of Central Oregon.

The Reid School was built in 1914 and was Bend’s first modern school building. During construction, one of the contractors, George Brosterhous, fell from the third floor and died. Today, many report seeing a misty apparition, often assumed to be George, wandering the halls of the museum. Workers also often hear footsteps walking along the third floor after hours.

One of the most historic theaters in Oregon, the Elsinore in Salem has been serving the community for almost 100 years. Built in a Tudor Gothic style, the building was meant to resemble the castle in the city of Elsinore from Shakespeare’s Hamlet. While it was originally built to showcase live plays and silent films, today the Elsinore is a destination for concerts, plays and other special events.

If you ever find yourself in the Elsinore at night, you’ll see the ghost light, a light bulb on a stand that glows center stage. It is there for safety, so people entertaining in the dark don’t fall off the stage but since this is theater, things often take on a life of their own. Those there at night report seeing multiple shadows cast by the ghost light walking along the walls of the theater. While performers practicing during the day have noticed a man walking through seats and settling in to watch the show. No one thinks ill of this ghost though, instead many believe it is the theater’s original owner: George Guthrie, checking in on his business.

If you ever visit Gold Hill, Oregon, make sure to stop by the Oregon Vortex, one of the most popular (and strangest) roadside attractions in the region. The area was once referred to by the Native Americans in the area as “forbidden ground”. Horses refused to walk into the area, completely stopping and reversing before entering the vortex—perplexing passersby for hundreds of years.

A Scottish geologist and mining engineer named John Lister developed the area in the 1920’s, theorizing that the property is the site of a “spherical force field”, half above the ground and half below it, which causes things to feel topsy turvy. On top of it sits a shack, which has strangely tilted over the years and has now become known as The House of Mysteries. Here, you’ll find that heights of visitors change, things on the ground roll in the wrong direction, and there have even been some reports of back pain relief from visitors. What caused the creation of such a space? No one truly knows, but many suspect it has something to do with the paranormal. It has even been subject to investigations on Fact or Faked: Paranormal Files and an episode of X-Files.

What did we miss?

Our communities are packed full of haunted destinations. Did we miss your favorite? Let us know all about it in the comments below!

🏡 The temperature is finally dropping, but that doesn’t mean that the real estate market is cooling down! While many decide to wait until spring and summer to sell, the colder months may just be the perfect time. Not only are there typically fewer properties on the market, giving you a chance to stand out, but cooler weather means buyers are more likely to want to spend the day perusing houses.⁠
⁠
8 Tips for Selling Your Home in the Fall & Winter⁠
— on the blog today! (Link in bio!)⁠
.⁠
.⁠
.⁠
.⁠
#VisitPDX #PDX #PDXHomes #PDXRealEstate #PDXHomesForSale #PortlandOregon #Portland #PNW #PNWRealEstate #ExplorePNW #PNW #PacificNorthwest #VisitOregon #VisitWashington⁠
_____________⁠
Tag #TheLocalArrow to be featured! ...

Candy, costumes and fall fun add up to create one of our favorite holidays: Halloween! While this Halloween, just like last year, is bound to look a little different from usual, there are still plenty of way...
October 6th  |   Neighborhood Insight, Portland, Southwest Washington, Uncategorized
15 Ways to Celebrate Halloween...
Settled in gorgeous Southwest Washington, Vancouver is a road trip destination all on its own. Offering some of the best recreation destinations in the country, a small town feel and a plethora of other ...
September 21st  |   Cannon Beach, Neighborhood Insight, Portland, Southwest Washington
7 Day Trips to Take From Vanco...