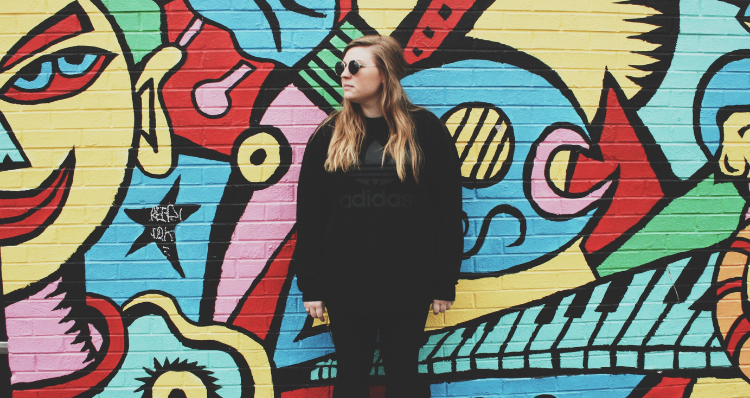 As one of the “Street Art Capitals” of the country, Portland has no shortage of incredible murals. Some of the most famous have been around since the mid 1960s, preserved for more than 50 years, while others have just popped up recently.

If you’re interested in seeing as many as possible, we created a bucket list filled with the most famous, historic and iconic murals that should definitely be on your itinerary! While there’s no way we could list every stunning mural in PDX on this list, the 25 below are a great starting point.

Check out our interactive map to find exact locations of each of these murals!

This giant banana on 12th & Division is one of Portland’s oldest pieces of “guerrilla graffiti,” which was originally painted by a rogue group called Gorilla Wallflare in 1982. It was revitalized during the Art Fills the Void Project in 2015.

This giant image of a woman in a pose of gratitude, with more than 1,000 plants for hair, is a part of local development company SolTerra‘s headquarters. The wall where it sits masks an “unconditioned space” that is just one of the building’s green features.

The Bad Karma Mural is a multi-colored mural outside Nemo Design on SE Belmont painted by Broken Fingaz that took inspiration from interesting stories that live in the streets of Portland.

This red mural is the second oldest in Portland, featuring the iconic face of Malcolm X. It was a part of the Albina Mural Project that saw several murals installed throughout the African American community in the 1970s.

The Black United Fund of Oregon is a Black-owned, community-specific nonprofit that operates on Alberta Street. The mural on the side of the building was created by artists Eatcho and Jeremy Nichols and features depictions of important Black women in history.

Botjoy, created by Gary Hirsch, is a movement about community and connection that all started with painted dominos that you could carry around in your pocket. Eventually the movement led the Regional Arts & Culture Council to commission five murals from Hirsch, which you can hunt down for yourself around town. There is much more information on the BotJoy website if you’re interested in learning more about the history of this now global art movement.

This giant mural, which was painted by Andrew Hem in 2015, depicts a boy in a tree with a lounging tiger amidst a snowy landscape. The duo can be found on the side of the Imago Dei Church on Ankeny Street.

This mural, which spans the entire side of the Plaid Pantry convenience store on SE 12th, was created by the late Joe Cotter in cooperation with the Buckman Neighborhood Association and dates back to 2008.

Surrounded by several other beautiful murals on SE Stark, the giant, green Cheshire Cat mural by Yoshi47 is a sight to behold! 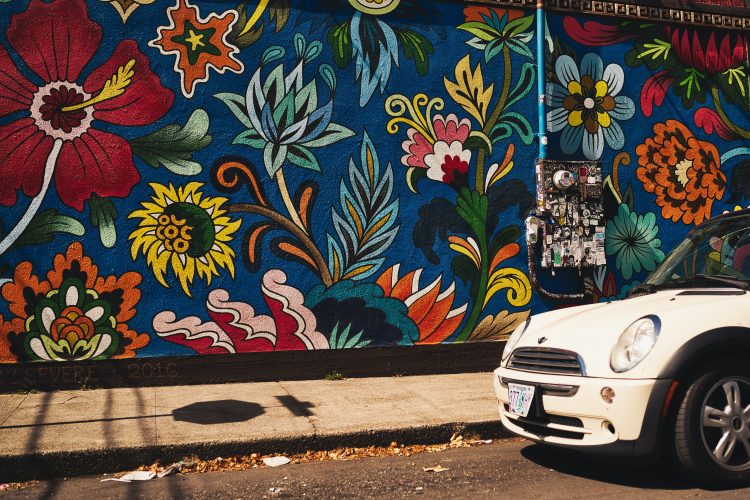 Painted on the side of what used to be the Blind Insect Gallery, this flower-forward mural is an iconic Instagram background. Today, the building is home to the Clary Sage Herbarium herb shop.

This photo-realistic mural of a rhino collecting street signs on its horn is a local favorite. The piece was painted by Josh Keyes, a PNW artist who creates politically grounded work focused on humans’ impact on the environment.

Painted on the side of the Community Cycling Center, a nonprofit dedicated to teaching bicycle safety and providing bikes to those in need, this stunning mural features a parade filled with bicycles, wheelchairs, tricycles, unicycles and other various human-powered machines.

The striking Everything is Everything typeface mural was created by local artist and typographer Zach Yarrington. Yarrington’s goal with all his work is to bring a positive message to the surrounding environment, including this upbeat white and black mural on SE Division St.

Love it or hate it, this 56,000-square-foot building has become a part of the Portland skyline and is, therefore, a must-see! Completed by Guerilla Development in 2015, the red, blue, green, yellow and white building has divided Portlanders while also providing a fantastic backdrop for photos and shopping in Burnside Bridgehead.

It just wouldn’t be a visit to The Pie Spot without walking around the corner to say hello to their two bright pink flamingos.

Settled on one of the walls on Zoom+Care’s Grand Avenue location, this large, complicated mural from Blaine Fontana is a gorgeous piece, depicting a photo-realistic blue hand reaching out towards several blackbirds and their nest.

Hawthorne Arrows is another fantastic mural painted by Blaine Fontana here in Portland. The photo-realistic arrows with a yellow backdrop on Hawthorne Blvd were painted for the 2015 Forest For The Trees, an annual mural event that happens each August. 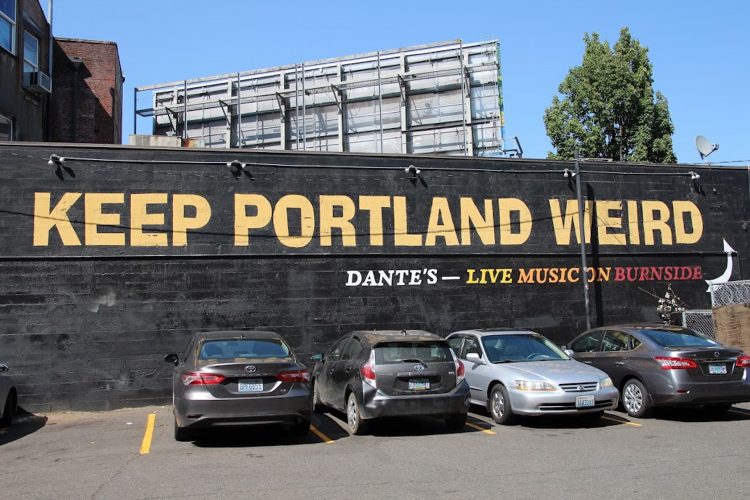 You’ve probably seen this iconic mural on all your friend’s Instagram feeds, in marketing posters, or even in the opening credits of Portlandia! You can find it for yourself in the parking lot behind Dante’s nightclub in Old Town.

Get a little morning motivation at this mural at Aladdin Finishers that was another creation for the Forest For The Trees mural event painted by Zach Yarrington and Jun Inoue.

Facing the Irvington Covenant Church on MLK Jr. Blvd, “Now is the Time, the Time is Now” is a stunning mural from Isaka Shamsud-Din that was painted in 1989 as part of a program to train and employ promising young artists.

This large, 35-by-50-foot mural was a collaboration between Rachel Oleson and Emily Beeks and is painted on the side of Pambiche, a Cuban restaurant on NE Glisan.

Located on the River City Bicycles building, River of Time is a bright, colorful mural from Celeste Byers and Aaron Glasson.

A beautiful creation by Pablo Garcia, this whimsical piece features a swimming elephant with a giant rose. Make sure to stick around a while to explore the many other murals on the building!

One of the most popular murals in Portland is To Oregon with Love, yet another creation from Blaine Fontana as part of the Forest For The Trees mural project. This mural has become synonymous with Portland street art and is a must-visit on any Portland art tour!

There was no way we could include all the incredible street art Portland has to offer on this list, but if you’re interested in checking out even more, we recommend taking a stroll through The Alberta Arts District, downtown Portland and southeast Portland. And, be sure to check out this handy map from the Portland Street Art Alliance!

Oregon and Southwest Washington are both home to thriving communities full of incredible locals, small businesses and outdoor recreation opportunities. So it is no surprise that our region consistently...
November 3rd  |   Cannon Beach, Central Oregon, Hood River, Neighborhood Insight, Portland, Southwest Washington
10 Reasons We're Thankful to L...
Over the past few years, pumpkin spice everything has taken the world by storm. These days, you can find almost anything in a pumpkin spice flavor come fall, but there’s nothing better than the one that sta...
September 23rd  |   Neighborhood Insight, Portland
Where to Find the Best Pumpkin...