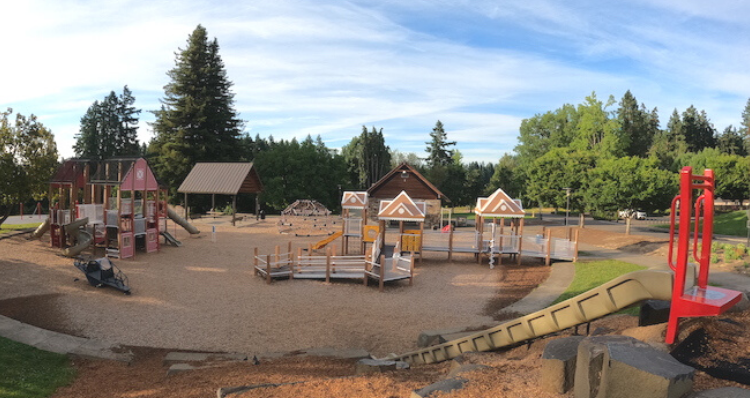 11 of the Coolest Playgrounds in the Portland Area, Mapped

On a sunny summer day, there’s nothing quite like a trip to a local playground when you’re a kid. If you’ve exhausted your neighborhood playgrounds and need some new territory to explore, you’ll be pleased to know that there are several destination playgrounds throughout the Portland Metro, including some in surrounding cities.

We’re exploring some of the best playgrounds in the Portland area, which contain all the necessary features you expect from a playground, like slides, swings and ropes, plus some unexpected amenities, like pirate ships, splash pads, fire trucks, and more unique attractions. Your little one will have a blast at any of these exciting Portland playgrounds!

Use our interactive map to guide you on your playground adventure.

Here’s something you don’t see every day at a modern-day playground — natural features, like sand and rocks. The Nature Playground at Westmoreland Park underwent an extensive renovation in 2014 as part of a pilot project for Portland Parks & Recreation’s Nature-Based Play Initiative. The goal of the initiative was “to create settings in developed parks that encourage creative play and interaction with natural features.” The playground contains a large sand pit with tools for digging and building, logs and a massive rock to climb, areas for building forts with tree limbs, and much more. And all of this is situated alongside a pond, enhancing the natural feel of the park.

Washington Park is an oasis for kids of all ages, as it is home to the Oregon Zoo, the Hoyt Arboretum, the Discovery Museum, gardens, and much more. Little ones ages 2–5 will especially love the Washington Park Playground, which has the largest play structure in the city. The playground contains swings, a sandbox, slides, and various features they can climb. Plus, there’s plenty of shade to hide under on a hot summer day! 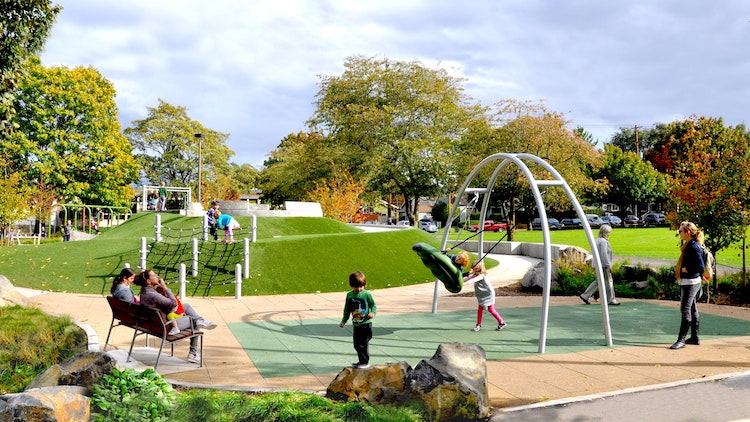 Not all playgrounds are designed to accommodate disabilities and varying mobility levels. Harper’s Playground is the response to this issue. Designed by the parents of a child with special needs, Harper’s Playground is a state-of-the-art, all-inclusive play area located in Arbor Lodge Park in North Portland. It features universally accessible paths, inviting play equipment, a sand pit with pumpable water and sensory play elements, slides, mini rock-climbing walls, and a few climbing ropes. All of this equipment is situated on soft Astroturf, a spongy ground covering that softens any falls. 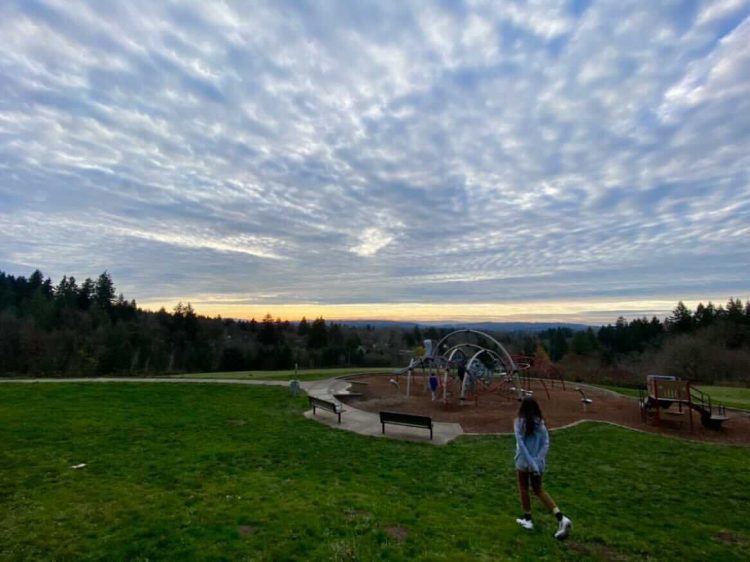 For a unique play experience, head to Dickinson Park to discover this modular, futuristic structure ideal for climbers of all ages. It contains rope ladders, circles to climb through, and quirky DNA-like formations to explore. The main structure is accompanied by a smaller section for younger kids with a small platform and slide. While this playground might not have many swings and slides, it has plenty to climb and look at! Heads up: there is no restroom at Dickinson Park, so be sure to prepare beforehand. 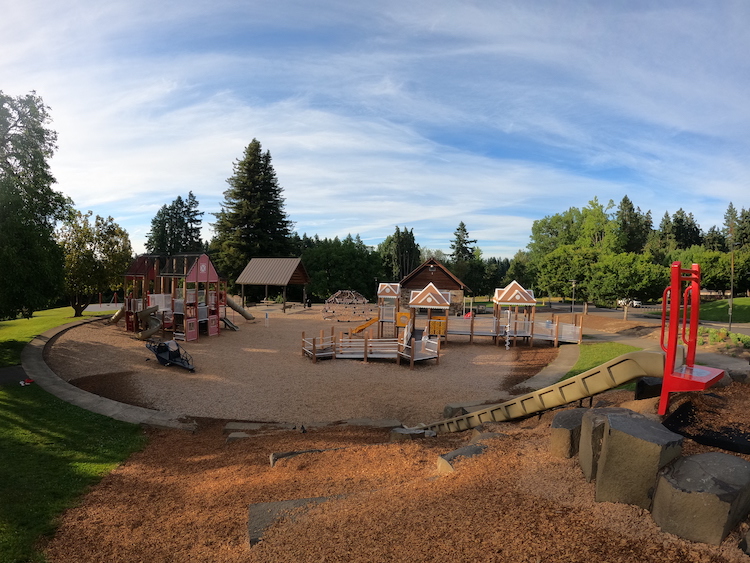 Make the trek to the Murase Plaza Playground at Memorial Park in Wilsonville — trust us, the drive is worth it. Renovated in 2015, the playground includes two large play structures, one designed for younger kids and the other for older kids. Both reflect a farm theme and look like miniature barns — much like the historic barn just down the hill. Your kids will love climbing on the spiderweb-like climbing dome or splashing in the splash pad with waterfalls, a running stream, and a U-shaped feature to run through. This massive park and playground are a wonderland for kids — especially on a hot summer day!

Got a future sailor in your family? They’ll love a visit to the playground at Francis Street Park in Hillsboro, which contains a boat-themed play structure. The boat is accompanied by a basic play structure with a slide, but it’s all surrounded by Astroturf, which means less dust and dirt when all is said and done. The playground has several benches, making it the ideal place to meet with other parents while your kids play. Francis Street Park also has paved paths, tennis courts, a basketball court, open grassy areas and wooded areas, for further play and exploration!

Head across the river to explore the Chelsea Anderson Playstation at Marshall Park in Vancouver. This massive play structure is situated in the 14-acre community park in the middle of the city, which contains ball fields, open lawn areas, a picnic shelter area, and much more.The playstation has slides, a log roll, a balance beam, a spiral staircase, a big arch climber, chain links to climb, a nature area, and even a fire truck structure. Plus, there’s a separate area for younger kids at the opposite end of the park.

However, this park is on this list because of its plans for the future; the Chelsea Anderson Playground is slated to be completely demolished and redone in the Harper’s Playground model. Click here for updates on this exciting project as it unfolds in the near future!

Get the best of both worlds at The Fields Park, an urban park in the heart of the Pearl District. The modern play structure mirrors the Fremont Bridge with metal and ropes to keep your little ones entertained. Plus, your four-legged buddies aren’t left out of the fun, as The Fields Park has an off-leash area for pets to play and use the restroom. This park is a lifesaver for those living in the city with pets or kids!

Formerly known as Bethany Meadows Park, Pirate Park is a (you guessed it!) pirate-themed park in Northwest Portland. The playground contains two separate pirate ship structures, one set atop an ocean-colored blacktop and the other set amongst wood chips. Between the two, there are plenty of things for your little pirate to explore, including several slides, climbing features, a nearby sandpit, two swing sets, walkway bridges, binoculars, masts and more. The park is accessible off the Rock Creek Trail, if you want to burn off even more energy after your afternoon of pirate play. Ahoy, matey!

Got a budding paleontologist in your family? They’ll love making the trek out to Ibach Park in Tualatin. The award-winning playground translates the history of Tualatin into three significant eras: pre-historic, Native American and pioneer. You’ll find a rib cage of “dinosaur bones,” a sand pit, two slides, and a “river” crossing, which requires another person to use their arm strength to carry someone else across. Plus, there is a more challenging climbing area for older kids on the other side of the park!

As Portland’s second oldest playground, the Peninsula Park playground is a community relic. The large blue structure contains a tunnel above ground, lots of ladders, balance beams, slides and more. Plus, the park has a variety of attractions to explore, including a horseshoe pit, sports fields, a splash pad, an outdoor stage, a public art area, a rose garden, a community center, and a tennis court. Keep in mind that the older structure is different than the plastic structures your little ones may be more accustomed to, so it might take a little guidance to maneuver!

What playground in Portland are we missing out on? Tell us all about it in the comments below!

From hotels offering ghastly pasts to a supernatural roadside attraction, our Oregon and Southwest Washington communities are filled with stories of real-life hauntings. To celebrate the season, we ...
October 13th  |   Cannon Beach, Central Oregon, Hood River, Neighborhood Insight, Portland, Southwest Washington
10 Real Haunted Places to Visi...
Candy, costumes and fall fun add up to create one of our favorite holidays: Halloween! While this Halloween, just like last year, is bound to look a little different from usual, there are still plenty of way...
October 6th  |   Neighborhood Insight, Portland, Southwest Washington, Uncategorized
15 Ways to Celebrate Halloween...