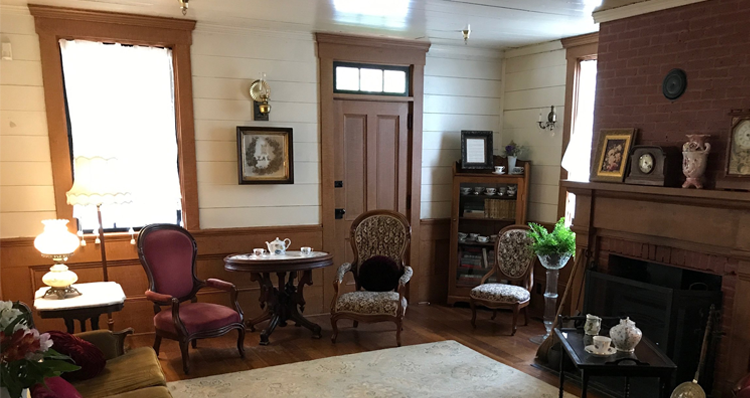 8 Haunted Hotels You Can Stay At in Oregon

Everyone loves a good ghost story — especially during the month of October. For some reason, many of us are fascinated by tales of mysterious apparitions, strange noises, unexplainable moving objects and other creepy occurrences.

Take it to the next level and stay amongst the ghosts by booking your stay at a haunted hotel, packed with stories — and a few stubborn characters from those stories. Have no fear — there are plenty of haunted hotels in Oregon, from the mysterious ocean shore to tiny towns in the middle of nowhere. We gathered some of the most renowned haunted hotels in the state, each with their own creepy stories — and former guests who just can’t seem to check out…

Photo Courtesy of the Argonauta Inn

Nestled along the ocean in Cannon Beach, the Argonauta Inn is a quaint inn with five suites, including the Beach House, a three-bedroom suite with a stone fireplace and two private decks. Each of the accommodations at the Argonauta Inn range in style and size, offering a range of options for your getaway on the beach.

If you book the Beach House, be warned — as the place is believed to be haunted by a former guest. After a major storm in 1952, Ghengis Hansel mysteriously disappeared. But many guests say they know exactly where he is now: roaming throughout the property late at night.

Marveling visitors and residents since opening in 1913, The Benson Hotel is a historic boutique hotel in the heart of downtown Portland. Built by millionaire innovator Simon Benson, the hotel is adorned with Italian marble floors, Austrian crystal chandeliers, and Circassian walnut wood from the imperial forests of Russia. Over the decades, the stately, luxurious rooms have been a temporary home to celebrities, CEOs, dignitaries and a majority of U.S. presidents.

The Benson has also been home to a more permanent resident: the restless spirit of its original owner, Simon Benson. He has been seen on the hotel’s staircase, in the common room area and in meeting rooms, where he often knocks over visitors’ drinks. Plus, a ghostly lady in a white dress and a young boy are said to wander the rooms and halls on occasion! 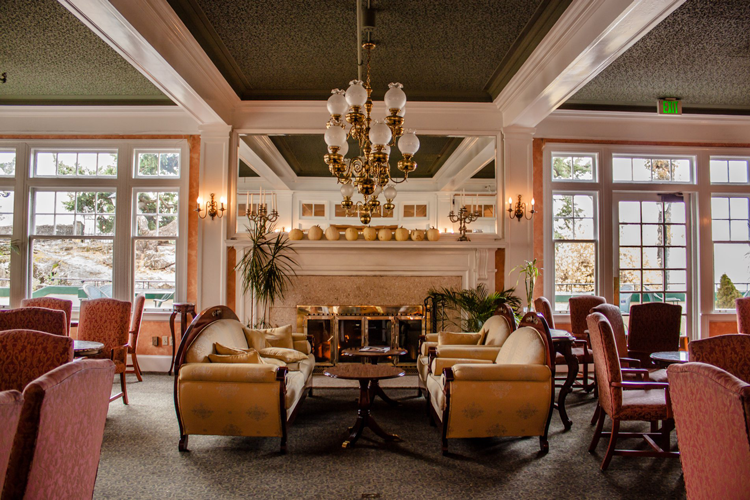 This historic manor-like hotel is situated on lawned gardens along the Columbia River in Hood River. Built in 1904, this historic hotel contains uniquely decorated rooms with en suite bathrooms, flat-screen TVs, and various amenities like fireplaces and river views. Plus, Columbia Gorge Hotel has its own full-service spa, a restaurant and a lounge, an exercise room and an event space. It’s one of our favorite places to stay while visiting Hood River, but it’s on this list for a different reason.

Some have reported strange occurrences at the hotel, including the smell of cigar smoke wafting through the space, furniture being barricaded from the inside of rooms with no one inside, and various apparitions. Ghostly residents include a man wearing a frock coat and top hat, a lady in white (who is said to have jumped off a balcony at the hotel), and a child who lingers on the ground floor where a pool used to be. 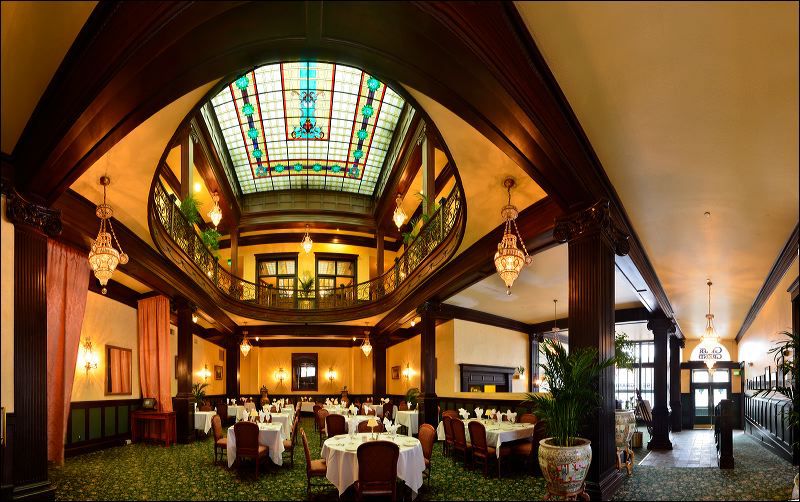 Located along the charming Main Street in the heart of Baker City, Geiser Grand Hotel is a historic landmark hotel decked out with elegance, from the crystal chandeliers in every room to the stunning stained glass ceiling in the lobby. The hotel is both an architectural jewel and a historic destination; in fact, its restoration received The National Trust for Historic Preservation’s coveted Honor Award for Excellence in Historic Preservation.

The Geiser Grand Hotel has also drawn attention as one of the most haunted hotels in all of Oregon. The most famous of the hotel’s ghost residents is known as “The Lady in Blue.” Dressed in a blue gown, she is seen walking up and down the main staircase. Other sightings include a saloon dancer from the 1920s, a headless former chef, a cowboy and his girlfriend. The hotel has embraced their haunted nature by offering paranormal investigations several times a year! October brings the annual Witches Weekend and Masquerade Party, this year with COVID-19 protocols in place.

Although it gets a lot of attention for its award-winning restaurant and unique Russian Tea Experience, The Heathman Hotel is first and foremost a luxury hotel. This hotel in downtown Portland has been a cultural fixture since the day it opened in 1927, and since underwent an expansive renovation showcasing a one-of-a-kind library with more than 2,700 volumes signed by their authors in a grand bookcase spanning two stories.

This Instagrammable hotel has a lesser-known secret: it’s one of the most haunted hotels in the state. Rooms ending in “03” are the source of most activity, as it is said someone jumped to their death and is now haunting all of the rooms they passed on their way down. Many have reported strange activity, such as glasses of water being moved, furniture being rearranged and clean towels being used. Room 703 is especially haunted, but guests staying in rooms 503, 603, 803 and 903 all report similar stories. 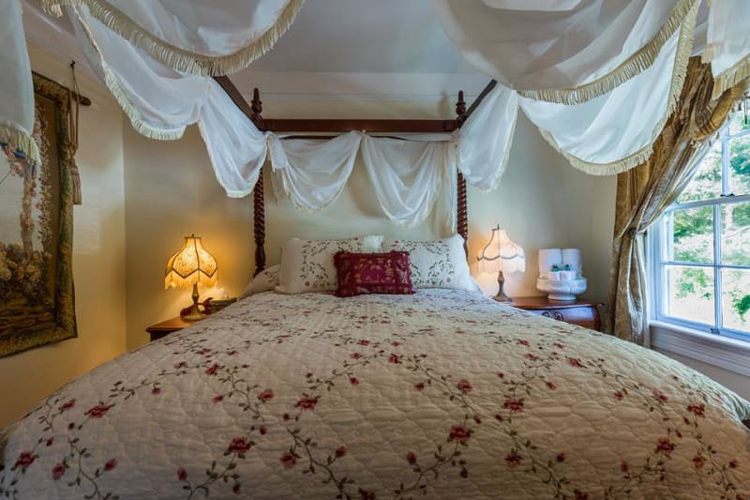 Built circa 1894, the Heceta Head Lighthouse and lightkeeper’s home are perched on a cliff 205 feet above the powerful ocean waves in Yachats. This working lighthouse has the brightest light on the Oregon coast — seen some 21 miles out to sea — and is the most photographed lighthouse in the country. A bed and breakfast operates out of the light keeper’s home, providing six guest rooms with a queen sized bed, original handcrafted fireplaces, ocean views and more.

The keeper’s house, where the bed and breakfast is, is said to be haunted by a spirit named Rue. She is the wife of the former lighthouse keeper and the mother of a little girl who drowned after falling from the cliffs and is believed to be buried somewhere on the grounds. Several guests have reported the smell of her rose perfume or seeing an unexplainable imprint on their bed that they didn’t leave. Apparently, Rue especially hates construction or renovation work, and has scared many a construction worker off the job!

McMenamins Edgefield is a former farmhouse dating back to 1911 nestled on 74 acres in Troutdale. One of the 27 breweries powered by McMenamins, Edgefield is certainly worth a visit, whether you are looking for a beer, a place to stay the night, a bite to eat, a glass of wine, a spa, a movie theater or a live music venue. The main building contains more than 100 guest rooms and hostel accommodations, all furnished in turn-of-the-century decor. The rooms do not contain televisions or telephones, offering a chance to disconnect and return to much simpler times.

Before McMenamins Edgefield was a lively hotel and entertainment destination, it was an asylum, known as Multnomah County Poor Farm. Many believe the property’s former residents still haunt McMenamins today, as there have been reports of children crying, disembodied voices, apparitions of both people and dogs, and more. 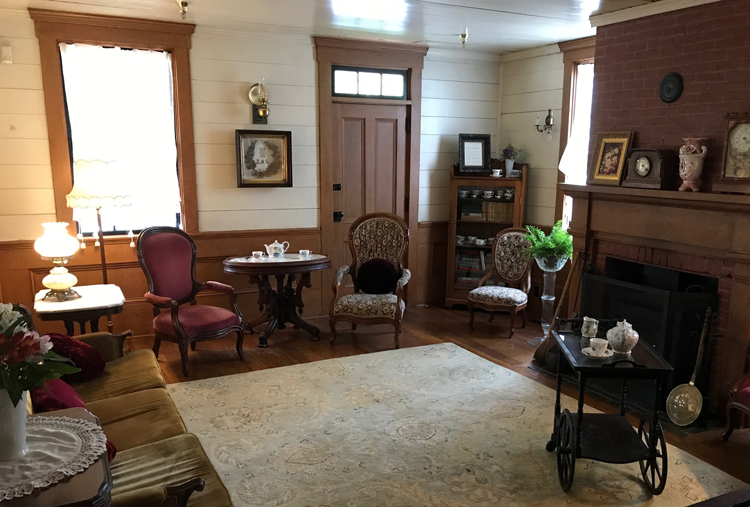 Situated in the tiny community of Wolf Creek at the southwest corner of Oregon, Wolf Creek Inn is a historic inn built in 1883 as a stage coach stop on the Applegate Trail. Over its 130+ years of operation, the inn has housed a number of celebrities, including Jack London and Clark Gable. The common areas and guest rooms are adorned with period pieces and decor, transporting you back to the inn’s previous life.

As the region’s oldest hotel, Wolf Creek Inn is also believed to be one of the most haunted hotels in the country. One of the most common ghost sightings is a vampire-like being with blood dripping out of his mouth. But the owner reports (in this video) several other phenomena staff and guests have experienced, including hearing voices in the ballroom, children kicking a ball, toes being played with in bed, drastic temperature changes, strange smells, and more. In fact, Wolf Creek Inn has embraced its hauntings by offering Paranormal Tours with a professional medium. Book your tour today — if you dare…

What haunted hotels in Oregon are we missing out on? We’re dying to know.

Spring has almost sprung in Portland, which means longer days, blooming flowers and plenty of exciting community events. And after the year we’ve had, we’re ready to celebrate as much as possible —...
March 12th  |   Neighborhood Insight, Portland
13 Outdoor + Distanced Spring ...
Over the last year, we’ve grown accustomed to cancelled or postponed events, COVID safety protocols and other adjustments to our daily routines. Throughout it all, one of the most consistent “safe” ac...
March 10th  |   Cannon Beach, Central Oregon, Hood River, Neighborhood Insight, Portland, Southwest Washington, Travel
15 Outdoor Adventures to Do Th...