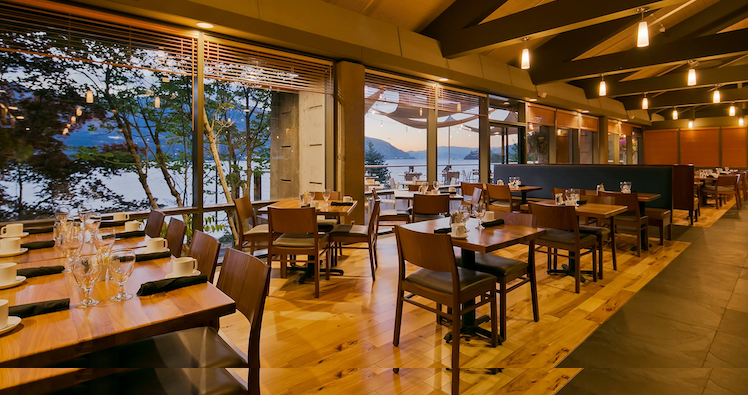 Restaurants + Breweries With a View in Hood River, Oregon

The only thing that enhances a delicious meal is an exceptional view — particularly one of nature, whether it’s a mountain, river or forest. And in Hood River, there is plenty of gorgeous scenery to go around!

Several locales in Hood River take advantage of this scenery with windows, patios and decks overlooking the Columbia River Gorge. Check out some of the best viewpoints in Hood River, including both restaurants and breweries (all of which have food menus!), the next time you want a side of river views with your meal. 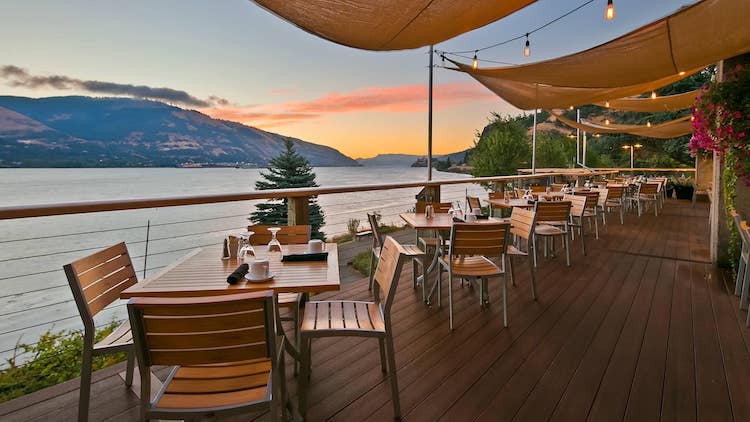 You might not have guessed that one of the best restaurants in the area would be located in a Best Western Inn, but Riverside has been a popular dining destination since 1967. It’s the only waterfront restaurant in the area, offering fantastic views of the Columbia River from the dining room and an expansive outdoor deck and patio! They serve breakfast, lunch and dinner using fresh, all natural ingredients.

For a true fine dining experience that feels as comfortable and inviting as home, look no further than Three Rivers Grill. Nestled along the lively Oak Street in the heart of Hood River, Three Rivers Grill specializes in Northwest cuisine, utilizing local organic products whenever possible. Sip on a selection from their award-winning wine list while you take in beautiful views, visible from most of their five dining rooms, the deck or the patio. Three Rivers Grill is open for lunch and dinner seven days a week! 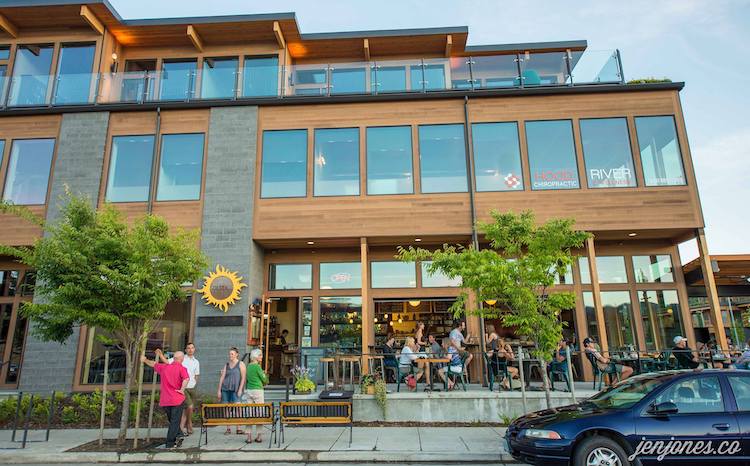 Solstice is a friendly pizzeria, bar and restaurant with river views and a menu showcasing the best local and seasonal ingredients. They’re located just a few steps away from the riverfront and feature a roaring fireplace inside. Their wood-fired pizza and other dishes are authentically inspired by the Italian countryside, meaning that you don’t have to go far for a taste of Italy in Oregon.

Situated on a manicured lawn along the river, the Columbia Gorge Hotel & Spa is a luxurious boutique hotel built in 1904. In addition to its 40 romantic guestrooms and spa, the hotel has a homey restaurant and lounge. Simon’s Cliffhouse is a sophisticated yet casual restaurant open for breakfast, lunch and dinner. And better yet, it offers incredible views of the Columbia Gorge, just steps away from the expansive window. After your meal, retreat to the Valentino Lounge, a Prohibition Era speakeasy open at 11 a.m. every day. Don’t miss happy hour on weekdays from 4–6 p.m.! 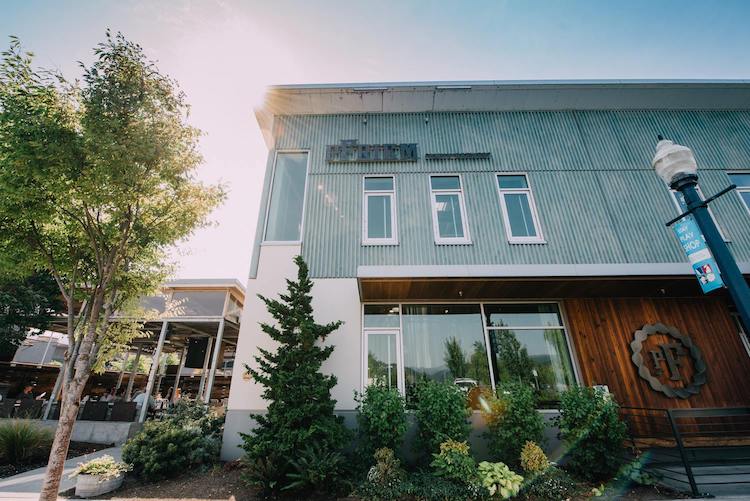 The story of pFriem Family Brewers began the way many breweries take form — with a deep love for craft beer. Friends Josh Pfriem, Ken Whiteman and Rudy Kellner joined their unique skill sets and passions together to create the brewery in 2012, and the rest is history. Situated along the waterfront, pFriem is well worth a visit — for the awe-inspiring river views, delicious pub food, and of course, the beers themselves. Stick with the classics, pair a meal with a select brew, or toast to a special occasion with a barrel-aged beer. Influenced by the great brewers of Europe, pFriem beers are an excellent accompaniment for every season and occasion.

While Big Horse Brew Pub is temporarily closed for renovations after suffering a fire, no list of Hood River establishments with views would be complete without it. Take in beautiful Gorge views from just about any spot in the four-story building — especially on the spacious deck. Big Horse opened their doors in 1988, making them the oldest brew pub in town. Today, brewmaster Neil Brent brews their beers on a four-barrel system, creating unique small batch beers just 960 pints at a time. This small-batch approach allows them to offer a variety of ales and lager styles, and to ensure each is poured at its peak of maturity. You’ll always find eight beers on tap here, including some that are only available in their downtown Hood River pub. Plus, Big Horse serves a full menu to accompany your beer of choice. Follow Big Horse on Facebook to keep an eye out for their re-opening! 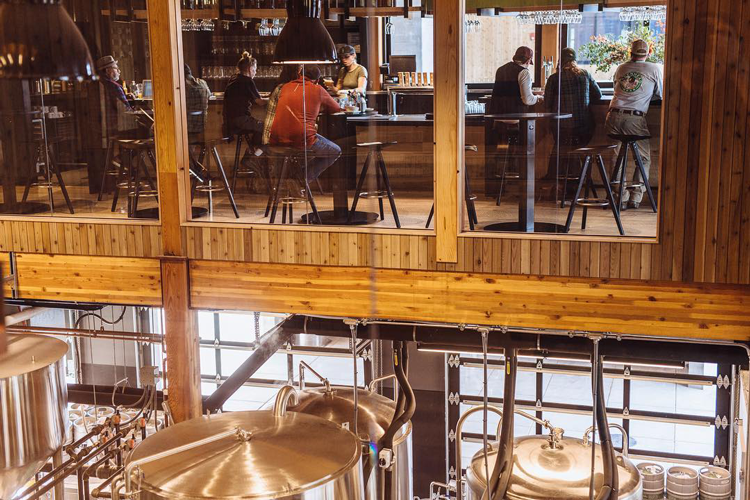 Ferment is a relatively new, modern brewery that fuses traditional farmhouse techniques with a forward-thinking scientific approach. Brewmaster and Director of Operations Dan Peterson used his love for science and background as a lab tech as he spent eight years in New York developing his brewing skills before moving to Hood River. He then spent several more years at both Full Sail and pFriem before starting Ferment in 2018. “Born out of an appreciation for the art of fermentation, Ferment offers a unique family of beers and kombuchas that tap the wild terrain of the Columbia River Gorge for inspiration and foraged ingredients” (from the Ferment Brewing website). Sample their signature, seasonal or single-batch beers in their gorgeous modern taproom offering incredible views of the Gorge — and if you only try one, make it their Pale Ale, which took home the gold at the 2019 Great American Beer Festival.

Take It All In

What viewpoints are we missing? Let us know in the comments below!

You may picture Hood River as a summer destination, and rightfully so! This town situated at the confluence of the Columbia River and Hood River is known as the “Windsurfing Capital of the World,” afte...
January 15th  |   Hood River, Neighborhood Insight
Things to Do in Hood River, Or...
With soaring mountains, sweeping vistas, sandy beaches and azure skies, Oregon in the summer is a dream. But after Labor Day, when the day-trippers start to stay home and the Californians flock back south, ou...
January 14th  |   Cannon Beach, Central Oregon, Hood River, Neighborhood Insight, Portland
10 Dreamy Winter Drives in Ore...