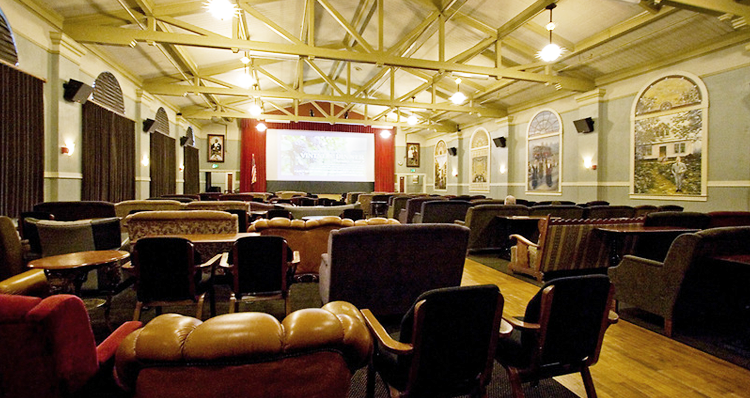 The 13 Best Beer Theaters in the Portland Area

With over 60 breweries in the city (and counting!), Portland is undoubtedly a mecca for craft beer. And Portland’s film culture and industry is growing more and more each year, with an abundance of independent theaters and massive events like the Portland Film Festival drawing filmmakers and film junkies from around the country.

Let’s combine these two worlds by exploring the many beer theaters in the Portland area. While these theaters range in age, style, size and features, you’ll find one thing in common amongst them all: beer. Sip on a local or regional beer, snack on some popcorn (or in many cases, enjoy a full meal!), and sit back and watch a first-run, second-run, independent or classic film at these theaters in Portland and surrounding suburbs. 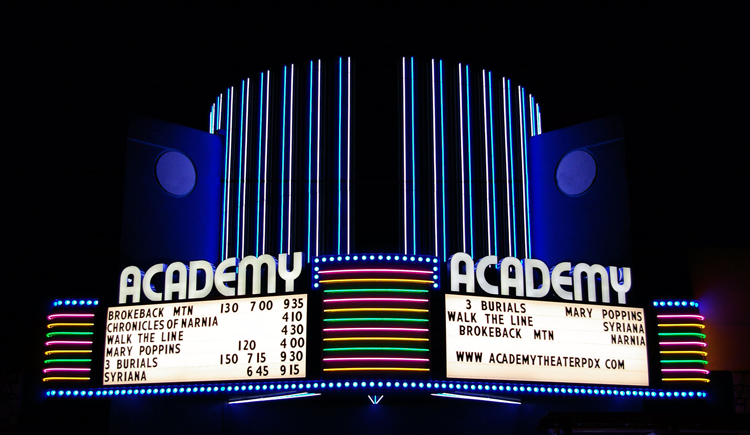 Originally opened in 1948, the Academy Theater is situated in the heart of the Montavilla neighborhood. The historic theater underwent a renovation in 2006 and offers three screens, which play a range of films, including second-run movies, independent and classic films, family-friendly movies and more. The concessions counter at the Academy is packed with options, including pizza slices from their neighbor, Flying Pie, hot dogs, sushi, salads, popcorn and candy, plus non-alcoholic and alcoholic beverages. Choose from 10 regional craft beers and ciders on draft, in addition to wines and canned beers. Tickets to the Academy are extremely reasonable — $4 for general admission, $3 for kids 12 and under, and $3 for those 65 and older. And they even offer babysitting for $9.50 per child!

Built in 1905 as the National Cash Register Company’s exhibit hall for the Lewis and Clark Exposition, St. Johns Theater & Pub has a rich and varied history. It served as a Lutheran church, an American Legion post, a bingo parlor, a home for gypsy wakes, and a pub under a different name before transforming into the St. Johns Theater & Pub we know and love. The theater shows first-run films for extremely reasonable prices; matinees cost $5 for both adults and kids, and shows after 5 p.m. are $7 for adults and $5 for kids. Plus, enjoy McMenamins’ selection of handcrafted beers, wines, ciders, spirits and a full menu of Northwest-style pub fare during the movie! 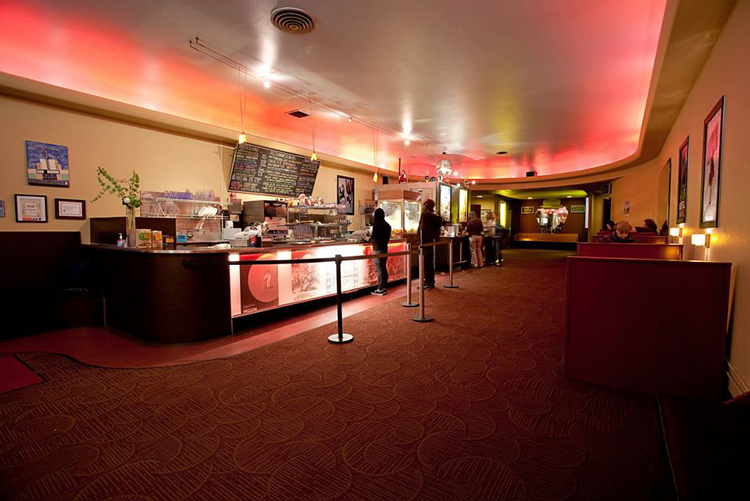 When it first opened in 1923, the Laurelhurst Theater had a single screen that could seat up to 650 people and was one of the first Art Deco-style theaters of the period. And after renovations and additions over the years, this historic theater in Kerns now features four auditoriums merging both modern amenities with its classic appeal. Head to the bar to order beer, wine, pizza, salads, popcorn and candy, all of which can be enjoyed while you watch your movie — which might be a first-run, independent, art or classic film.

Living Room Theaters is reinventing the movie-going experience by providing a comfortable, chic space you actually want to hang out in. The theater’s lobby is equipped with a swanky cocktail bar, a cozy fireplace, soaring windows and an arrangement of tables, chairs and sofas that invites you to linger, connect and relax. Order a glass of wine or a beer or a bite to eat, from tapas to pizzas, either from the bar or from your plush seat before the movie starts. Living Room Theaters has six screens showing first-run films and indie films alike. For this luxurious setup, you’d expect the prices to be high, but tickets range from $8–11 — and on Mondays and Tuesdays, tickets drop to $6. 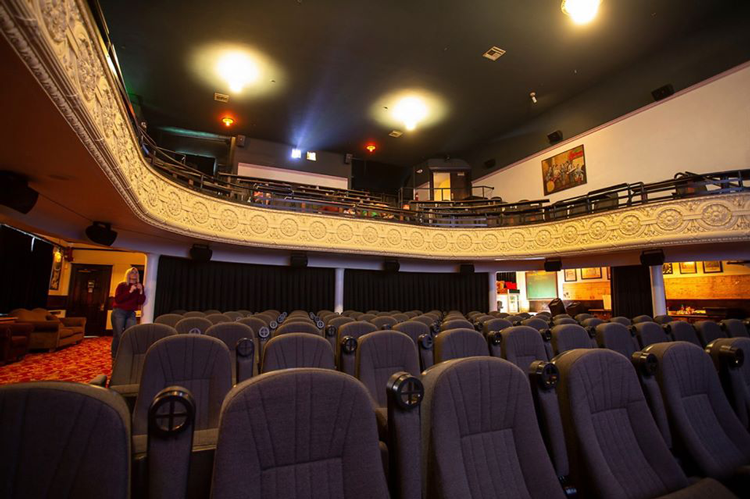 If it’s a McMenamins building, there’s sure to be some interesting history — and that is certainly the case for Mission Theater. As you could have guessed by its appearance and its name, the building was originally a church when it was built in 1891, but it later served as a longshoreman meeting hall. Order a meal or snack from the full menu and non-alcoholic or alcoholic beverages, including handcrafted ales, wines, hard cider and beer (both McMenamins and guest taps!). While the prices at Mission Theater are always pretty reasonable, they offer some specials throughout the week, including $5 for all movie tickets on Mondays, $5 pints (tickets not included) on Tuesdays, and $10 for pizza, a pint of ale and popcorn (tickets not included) on Wednesdays.

Built in 1926, Cinema 21 was originally called The State Theater and showed silent films with a live organ and musical accompaniment in an orchestra pit. Today, after a few more name changes, the theater plays an integral role in the city’s film culture, showing indie, foreign language, documentary and classic films. In 2013, two more screens were added in addition to a new concessions bar, which serves beer and wine. And in 2014, the original theater was renovated with new seats, a screen, projection and sound equipment, carpeting and paint. Situated in the heart of the Alphabet District, Cinema 21 is an iconic landmark and a link to Portland’s past. 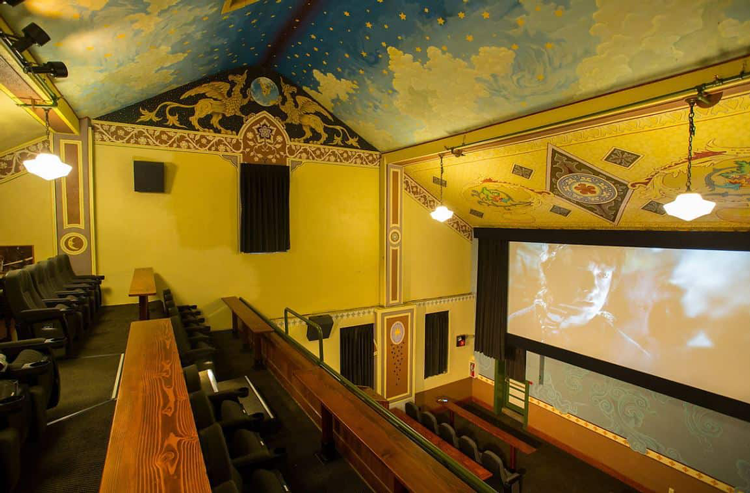 Power Station is situated inside McMenamins Edgefield, a former farmhouse nestled on 74 acres in Troutdale. One of the 27 breweries powered by McMenamins, Edgefield is certainly worth a visit, whether you are looking for a beer, a place to stay the night, a bite to eat, a glass of wine, a spa, a movie theater or a live music venue. But if you are looking for a beer and a movie, you’ve come to the right place. Edgefield brews a variety of beers, including both a regular rotation of standards and an array of seasonals, with an extra emphasis on IPAs. Sip on one of these beers while you watch a movie in the farm’s former boiler room, equipped with deluxe sound equipment and comfortable seating. Relax in the theater while the staff delivers your food and beverages to your seat!

Retreat to Lake Theater & Cafe, a unique theater with plush seating with a full food and drink menu. This historic theater in Lake Oswego serves a variety of food and drinks to enjoy while watching a movie in one of their two intimate theaters. The main auditorium features stadium-riser seats, and the event space features cabaret-style seating with tables and chairs on the main floor and traditional theater seating in the balcony. Guests may eat and drink in both venues! Take a look at upcoming showtimes to plan your visit to Lake Theater & Cafe. 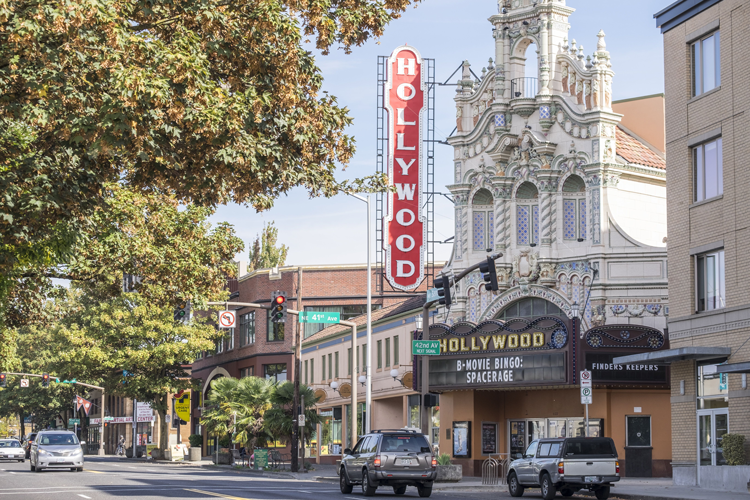 This Portland landmark theatre has a national reputation for award-winning film programming, innovative educational programs, and providing fiscal support for local filmmakers. Since opening in 1926, this non-profit theater has received a number of renovations and updates, including digital surround sound and a historically accurate update to its facade. Head to the Hollywood Theatre to see classic and contemporary films, live performances and more in a nostalgic setting. Plus, enjoy a wide variety of beverages (including beer and wine), pizza from the neighboring Atomic Pizza, Salt and Straw ice cream, and of course, popcorn. Tickets are typically $6 for matinees and $9 for night showings.

First opened in 1926, the Moreland Theater is a beloved single-screen, 675-seat cinema in the Sellwood neighborhood. While it has received equipment and design updates over the years, the Moreland has retained its single auditorium and classic vintage feel. The theater first presented vaudeville acts and silent pictures in its early days, and today, shows first-run movies and serves a variety of concessions — including beer! 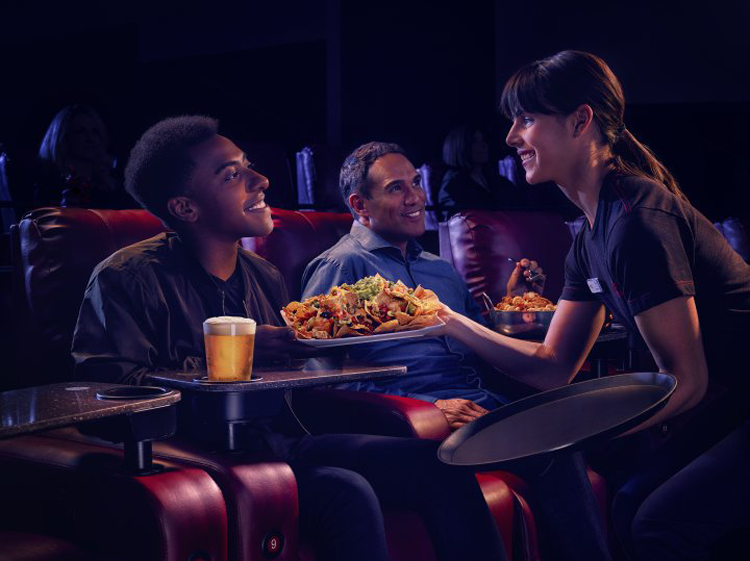 Situated in the heart of Beaverton, AMC Dine-In Progress Ridge is an extravagant restaurant-meets-movie-theater. Each of their auditoriums features the industry’s finest comforts with plush leather extra-wide seats, extra leg room, and excellent stadium viewing. Use the Dine-In Express Pickup feature to be notified when your food is ready or opt to have your food and drinks delivered to your seat. Plus, take advantage of reserved seating to ensure you get the best view possible while you enjoy your meal!

Dating back to 1927, Bagdad Theater & Pub in the Hawthorne District is a relic of Hollywood’s golden age and was once the city’s largest theater outside the downtown area. The interior is adorned with elegant details, including barreled arches, ornate wrought-iron fixtures, brilliant mosaics, and painted Mediterranean designs and characters. Check out what’s on tap and pair your beer with grab-and-go theater classics like pizza slices, popcorn and candy, or something off the full food menu. 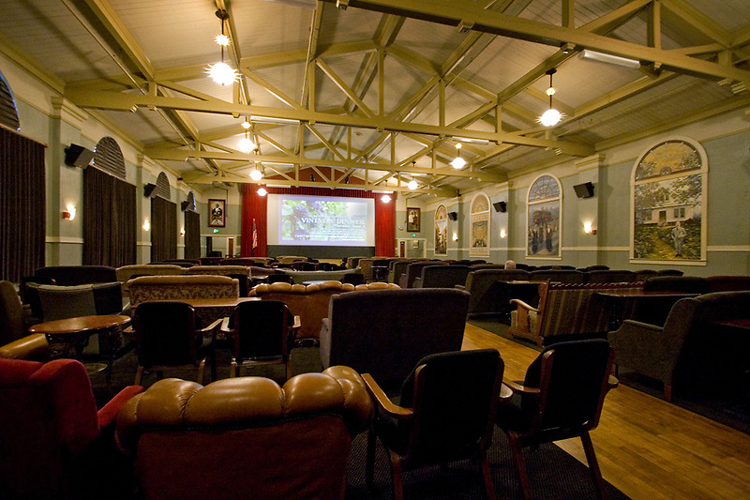 This beloved school-auditorium-turned-movie-theater is another McMenamins establishment with a cool backstory. McMenamins Kennedy School opened in 1915 and served as a beloved fixture in Northeast Portland before it was abandoned by the 1990s. It has since been reimagined as a hotel with 57 guest rooms plus a variety of amenities, including a restaurant, multiple small bars, a movie theater, a soaking pool, a gift shop, and a brewery. That means you can watch a second-run movie in the old auditorium while you sip on a local beer. With a capacity of just 300, the seating here is particularly unique, as there are a number of comfortable old sofas, armchairs and tables for two. To complete the historic experience, the murals along the wall tell the history of Kennedy School and the surrounding neighborhood.

What is your favorite beer theater in the area? Let us know in the comments below — whether or not they’re on this list!

In a techy city like Portland, it’s no surprise that many residents rely on a number of apps to enhance their lives — and in some cases, help them get from point A to point B. In addition to the obvious ...
January 15th  |   Neighborhood Insight, Portland
22 Essential Apps for Every Po...
As you know, the unofficial motto of Portland is “Keep Portland Weird.” But the phrase has evolved into more than just something cute to put on a bumper sticker or a larger-than-life mural. It has become ...
January 10th  |   Neighborhood Insight, Portland
Keep Portland Weird | 16 Weird...