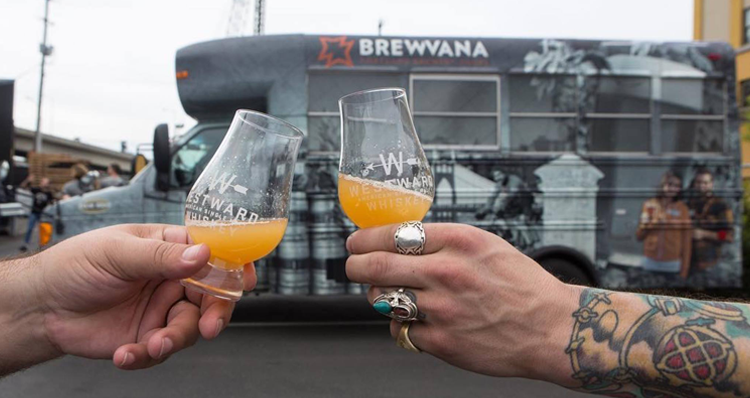 Alright, alright — we all know. Portland has a thing for craft beer. Just step inside one of the city’s best breweries and you’ll experience the handiwork of our innovative brewers and brewmasters, whether you prefer a fresh and hoppy IPA or a dark and rich stout.

Sure, you’ve been to a few breweries in town, but have you stepped behind the counter to see how the magic happens? These brewery tours in Portland give you an exclusive behind-the-scenes look at the operations at some of our city’s finest breweries — not to mention, plenty of beer samples. Some are scheduled on a regular basis, while others are offered by request. Plus, we’ve included a few powerhouse tour companies that transport you to multiple breweries — either on foot or by bike!

Whether you’re pedaling, walking or some combination of the two — enjoy these craft beer tours in Portland. Cheers! 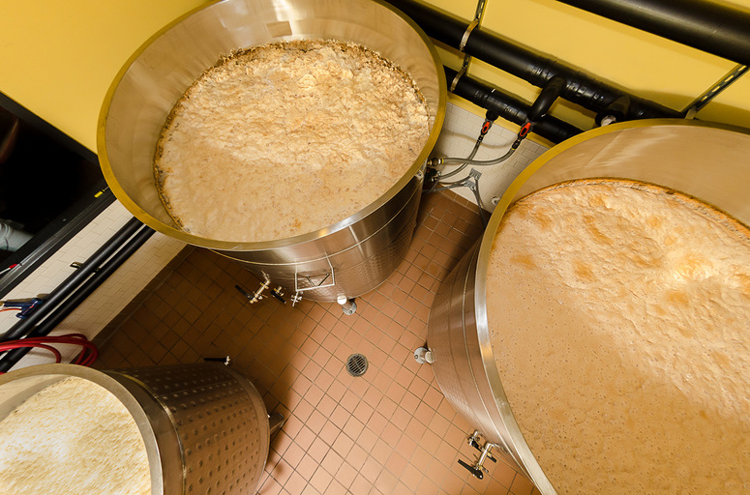 This intimate and casual microbrewery in Eliot has attracted a loyal following since opening in 2009. Upright Brewing specializes in farmhouse-inspired beers rooted in France and Belgium, made with a Pacific Northwest twist. The name “Upright” references the primary instrument of Charles Mingus, an excellent musician whose compositions defied categorization. The brewery aims to do the same by utilizing recipes and processes beyond boundaries, yielding an end result that aligns with Mingus’ spirit of creativity and experimentation. Sample a wide selection of year-round and seasonal brews in their cozy tasting room, which is open Tuesday through Friday from 4:30–9 p.m. and Saturday and Sunday from 2–9 p.m. (closed on Mondays). While there isn’t a formal tour at Upright, if you ask for a tour they are likely to give you one.

From Oregon craft brewing icon, John Harris, comes the new and exciting venture of Ecliptic Brewing. After brewing at McMenamins, Deschutes Brewing and Full Sail, John has united two of his passions with Ecliptic — brewing and astronomy. The brewery focuses on the ecliptic, which is the earth’s yearly path around the sun, through its branding and decor (including a massive light structure in the shape of the Analemma), and food and beer menus changing on a seasonal basis. The menu at Ecliptic rotates every six weeks, to reflect the Old World calendar: Samhain, Winter Solstice, Brighid, Spring Equinox, Beltaine, Summer Solstice, Lammas and the Autumnal Equinox. Ecliptic has an exceptional atmosphere — from the bright and modern interior to the airy outdoor patio with plenty of seating.

Make your visit even happier by stopping by for happy hour all day Monday, or Tuesday–Friday from 3–6 p.m. And take it to the next level with a walk-in tour available at noon on Mondays, Tuesdays and Fridays. Just remember to wear closed-toe shoes and be flexible, as each tour is subject to change depending on the happenings at the brewery during your visit.

After you watch the video showcasing the building process, you can fully appreciate Migration Brewings’ brand new location in Gresham. This 20,000-square-foot space is a restaurant and a brewery all in one, comprised of exposed wooden beams, a theme carried over from their other pub location. At their Gresham space, you’ll find 10 beers on tap, including seven of their core beers and three seasonal beers. You can also order pizzas, sandwiches, salads and other bites to eat to complement your brew of choice. They offer free brewery tours at 3 p.m. on Saturdays and can set up tours for groups on other days of the week with advanced notice. 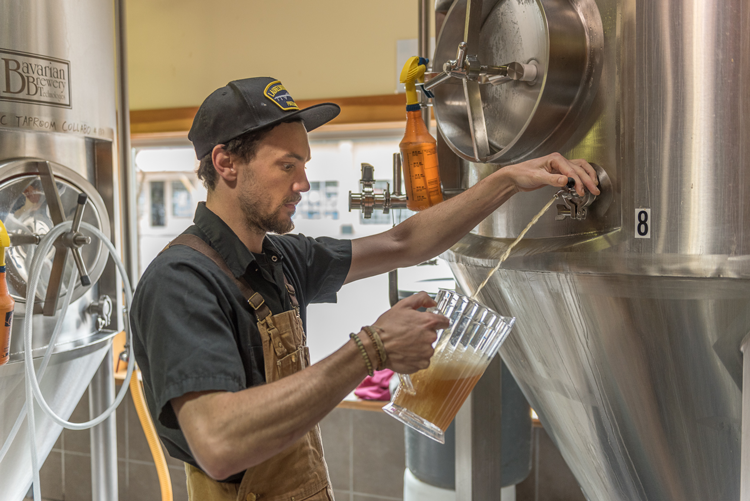 Featuring one of the best rooftop patios in the city, Laurelwood Brewery and Public House is a fun place for all ages — even kids. This family-friendly brewery takes it to the next level with play areas located throughout the restaurant. And for the adults, Laurelwood brews an array of organic beers in their 15-barrel brewery system, which you can view if you just ask for a tour! Plus, all of their food is certified organic and free-range. Choose from 10 beers on tap, including a few seasonal options, or find their 12-ounce and 16-ounce cans at various locations around Oregon and Washington. Stop by during happy hour offered daily from 3–6 p.m. or 9 p.m.–close OR test your limits with axe throwing, available without any appointment on weekdays from 3–9 p.m. or Saturday and Sunday from 12–9 p.m.

Edgefield Brewery is situated on a former farmhouse amidst 74 acres in Troutsdale. One of the 27 breweries powered by McMenamins, Edgefield Brewery is worth a visit, whether you are looking for a beer, a place to stay the night, a bite to eat, a glass of wine, a spa, a movie theater or a live music venue. But if you are looking for a beer, you’ve come to the right place. Edgefield brews a variety of beers, including both a regular rotation of standards and an array of seasonals, with an extra emphasis on IPAs. Experimentation abounds at Edgefield, where the paddle is currently led by Nathan Whitney, Will Gaither, Shane Kono and Dave Kosanke. And Brewery Manager Matt Bergfield oversees the madness that’s required for endless creativity. Tours of the brewery are generally offered Mondays through Saturdays at 1 p.m.

Hopworks Urban Brewery isn’t your typical brewery. In addition to brewing delicious breweries, HUB is the first Certified B Corporation in the Pacific Northwest. But what does that mean exactly? Since day one, the team has made every effort to create world-class beer and food with sustainable business practices that protect our environment and support our community. Whenever possible, they source organic malts and local, organic and Salmon-Safe hops for our beers. This family-owned and -operated brewery donates 1 percent of their beer sales to environmental organizations that focus their efforts on forest, bikes and water. Get a free tour of this forward-thinking brewery every Saturday at 3 p.m., which includes two tastings of their beer. Walk-ins are welcome, but parties of 10 or more must contact Hopworks in advance by emailing Tours@HopworksBeer.com. Tours are limited to 20 people and all guests must wear closed-toe shoes for safety reasons. 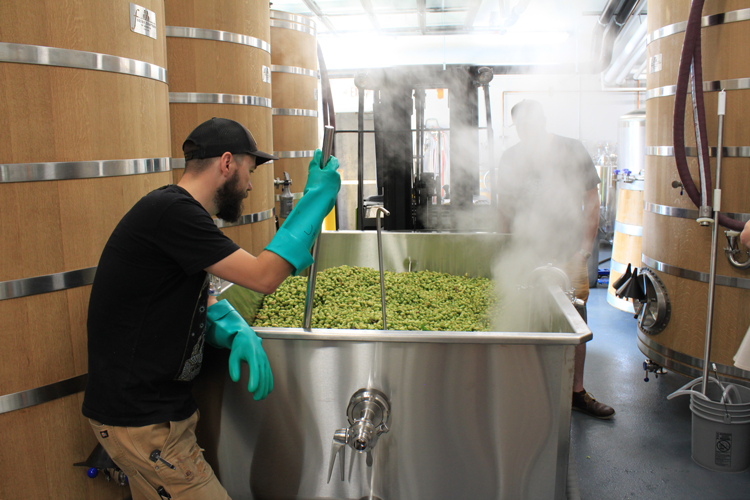 Situated in the heart of the Pearl District and Glendoveer, Von Ebert is an expansive brewpub that does not mess around. The powerhouse team at Von Ebert creates around 100 different styles of beer a year, and options change every few days to reflect the constant new creations available. They brew on an American-made custom 10bbl brew house built by JVNW in Canby, and most beer is poured directly from their brite tanks, which helps keep aroma in the beer. Order a meal to accompany your brew of choice, and make arrangements in advance to receive a tour of Von Ebert so you can take a look behind the scenes (although they do not offer public tours!). The downtown location features arched ceilings, lots of natural light and the historic charm of the Pearl District.

Could it be?! A completely gluten-free brewery? That’s right — Groundbreaker Brewing is living up to their name with their 100 percent gluten-free beer and food. Every beer is naturally gluten-free, made in their facilities where no items containing gluten are allowed through the door. Their gastropub next door serves a delicious gluten-free food menu to accompany your beer, with options for snacks, soups, salads and large plates. You can arrange a tour at Groundbreaker before 5 p.m. by either asking your server upon arrival or calling ahead to schedule a tour! If you have more than four people, consider scheduling a tour in advance by calling 503-974-4467.

Brothers and beer enthusiasts Kurt and Rob Widmer began brewing their own beer in 1979, the year home brewing was legalized in Oregon. And in 1984, they built the Widmer Brewing Company in an industrial part of Northwest Portland, what is now the Pearl District. They officially opened on April 2, 1984, and the very first beer they perfected was Altbier, which means “old beer” in German. And the rest is history! Today, you can tour their modern and environmentally driven facilities and speak to brewers and brewmasters along the way. Snag your tour glass and experience the ultimate craft brewery tour experience, complete with beer samples for those 21 and over. All tour members receive a complimentary 12-ounce “can of the day” at the end of the tour featuring different small batch and new release beers. 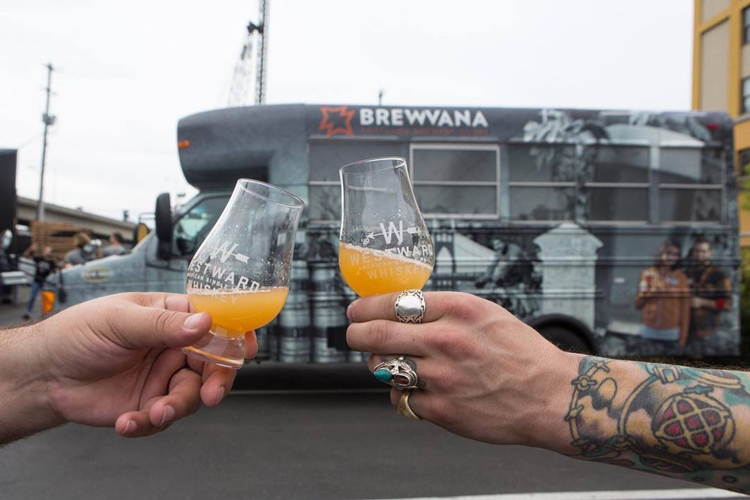 Hop on board one of Brewvana’s three 14-passenger buses that transports craft beer lovers to various breweries around the city. Choose from a few different tours offered on a weekly basis, including the Pacific Northwest is Best tour, which covers the ingredients, history and culture that makes the craft beer scene in the PNW admired worldwide. Opt for a special beer and whiskey pairing with the Beers & Barrels tour, or discover all fermented beverages on the Down to Ferment tour. Each tour includes a souvenir glass, pretzel necklaces, a beer journal and tasting guide, food, and of course, a knowledgeable guide to steer your journey through the local beer scene.

The BeerQuest tour takes you to the heart of the Historic Old Town District for a look at the city’s vibrant history — all while sipping on some of its finest beers. Enjoy 11 6-ounce samples from three world-class breweries, including Old Town Brewing, Ascendant Brewing, and Rock Bottom Brewing. Starting at Rock Bottom (no pun intended!), the tour lasts about three hours and costs $48 per person, plus a booking fee.

Pedal Bike Tours offers a variety of tours throughout the state, including a tour of Portland’s best donuts, a Columbia River Gorge tour, a waterfall hike tour, and more. But for our purposes, let’s take a look at their Portland Brewery Trail Bike Tour, a three-hour, 5-mile tour past many of Oregon’s best local breweries. Sip on beer from three breweries, plus a bonus beer from the shop keg after the tour! You’ll even get a behind-the-scenes look at one of the breweries, and get information about some of the best bars, restaurants and sights in the city along the way. Check out their website for more information about tours.

You’ve seen them pedaling around town — and you’ve secretly wanted to join in on the bike-meets-beer party. BrewCycle is perhaps the most famous brewery tour in Portland, and is an undeniably “Portland” business merging biking with our city’s incredible craft beer scene. Hop on board the pedal-powered group wagon that stops at three places, varying depending on the type of tour you choose, from the Old Portland Route, which uncovers the city’s oldest watering holes, to the Trailblazer Route, which takes you to the places that put Portland on the map for craft beer.

What brewery tours in Portland are we missing out on? Let us know in the comments below!

In a world of single-use plastic, unnecessary food waste and other wasteful practices, there are plenty of ways we can try to reduce waste, in both small-scale and large-scale ways. And thankfully, the eco-co...
February 21st  |   Portland
14 Practical Ways to Reduce Wa...
Header Photo: Helicopter Tours With Oregon Helicopters One of the best ways to explore a city, including everything from its best dining destinations to its most hidden secrets, is with a guided tour. With a...
February 13th  |   Neighborhood Insight, Portland
The 16 Coolest Guided Tours to...