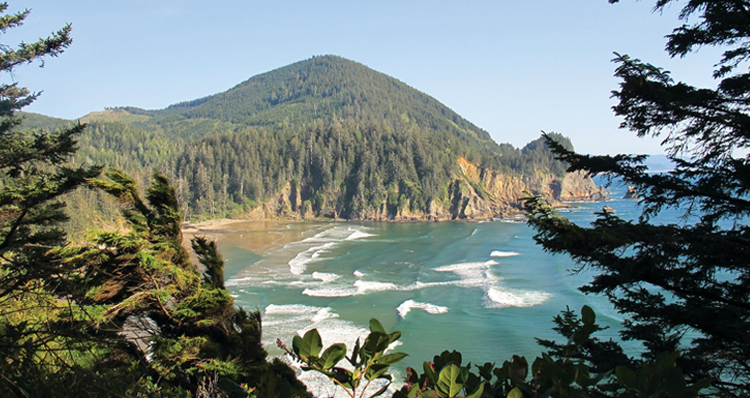 The quaint coastal town of Cannon Beach is accompanied by a vast beach popular amongst locals and visitors alike, for the iconic Haystack Rock, the warm sand dunes, and the wide stretch of sand perfect for enjoying a picnic or flying a kite.

However, this beautiful stretch of coastline is just scratching the surface of all that this region has to offer. In fact, there are four state parks located within 10 minutes of Cannon Beach, offering a wide range of options for outdoor adventure along the coast. Get to know these four state parks and plan your next adventure, whether you live in Cannon Beach or are just visiting for the weekend. 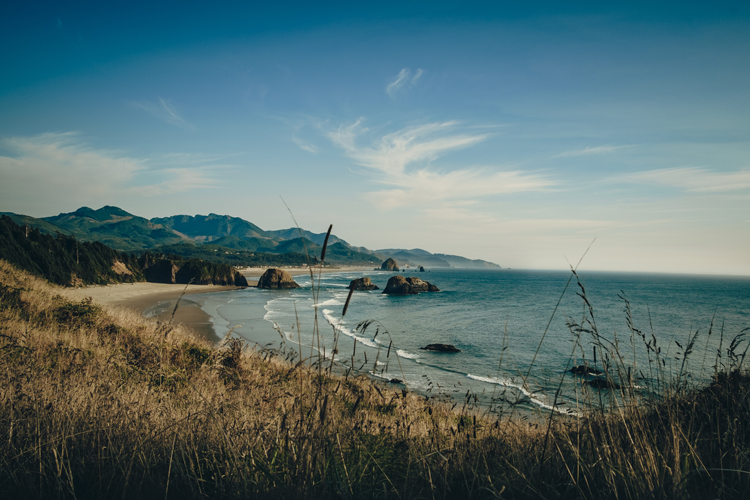 Just north of Cannon Beach lies Ecola State Park, a scenic forested area stretching along 9 miles of coastline. This historic park is known for its excellent sightseeing opportunities and hiking options, but there is no shortage of outdoor recreation activities at Ecola State Park, such as picnicking, tidepooling, surfing and wildlife observation. Take in views of the ocean and sea stacks from the grassy bluff near the entrance, and continue the sightseeing throughout your visit. The park’s trail network includes an 8-mile segment of the Oregon Coast Trail and a 2.5-mile route called the Clatsop Loop Trail. Another popular spot at Ecola State Park is Indian Beach, a secluded sandy beach with plenty of tidepools and oceanic wildlife, including gray whales migrating during the winter and spring! And don’t miss the abandoned historic Tillamook Rock Lighthouse, visible offshore to the right as you’re sitting on Indian Beach.

P.S. You may recognize this iconic Oregon park from a number of films, including The Goonies, Kindergarten Cop, Point Break and Twilight.

History: Part of the Clatsop Loop Trail and the trail passing over Tillamook Head follow along the footsteps of Captain William Clark and 12 members of the Corps of Discovery. They passed through what is now Ecola State Park in 1806 in search of a beached whale. After Clark scaled the north slope of Tillamook Head and took in the view of the ocean, he described it as “the grandest and most pleasing prospects which my eyes ever surveyed.” 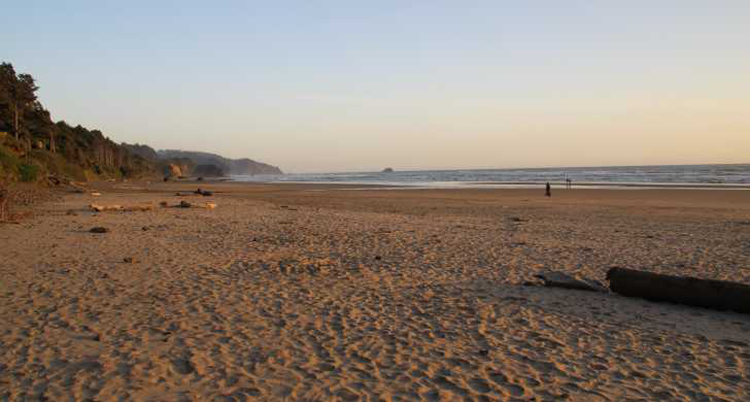 Situated along the ocean just about two minutes south of Cannon Beach, Arcadia Beach State Recreation Site is the perfect place for a scenic beach walk. The area extends for more than a mile between two headlands — Humbug Point to the north and Hug Point to the south. Both can only be passed at low tide, and Hug Point is especially difficult to pass. Arcadia Beach is an excellent place to enjoy a picnic on the sand, explore tidepools, fly a kite or watch surfers just off shore. This laid-back area is less crowded than the area around Haystack Rock during the height of summer, offering a more private and secluded feel. All the while, admire towering rock formations adorned with tall trees and the mighty waves crashing on the sandy shore.

History: Humbug Point and Hug Point have similar names because Humbug Point was often confused with Hug Point, the most difficult headland for pioneers to pass when traveling south along the coast. If you visit during low tide, make your way north to see Silver Point, named for the silvery color of the spruce trees on top of the bluff. 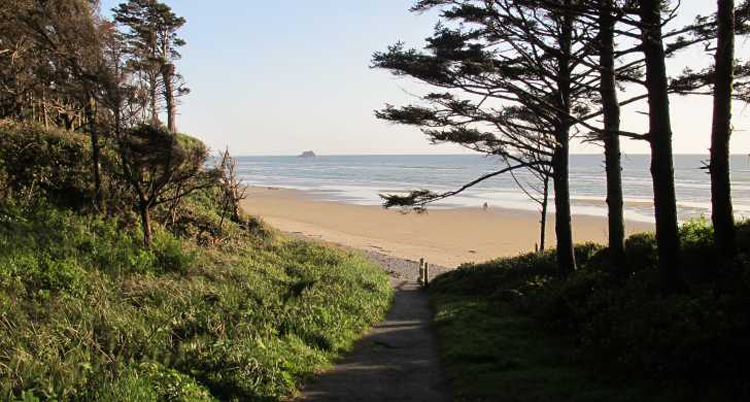 Proceed with caution! As mentioned, Hug Point can be dangerous — especially during high tide. Before you go, be sure to check the updated tide and sand conditions, and remember: if in doubt, don’t go out!

This beautiful recreation site offers access to the beach, forested picnic areas, and a pleasant mix of scenic beauty and local history. During low tide, walk north past the point to discover some sea caves, tidepools, a tiny waterfall, and remnants of an old roadway along the cliff. Again, be aware of the tide, as it is possible to be stranded by the incoming tide when exploring beyond the point.

History: Before we had highways, the beach was the only way to travel through this stretch of the Oregon Coast. Hug Point was the most difficult spot to pass for pioneers, who had to “hug” the point, even during low tide. Therefore, both the point and the park were named Hug Point. If you’re visiting during low tide, be sure to search for the wheel ruts carved into the rock of the original stagecoach road north of the parking lot! 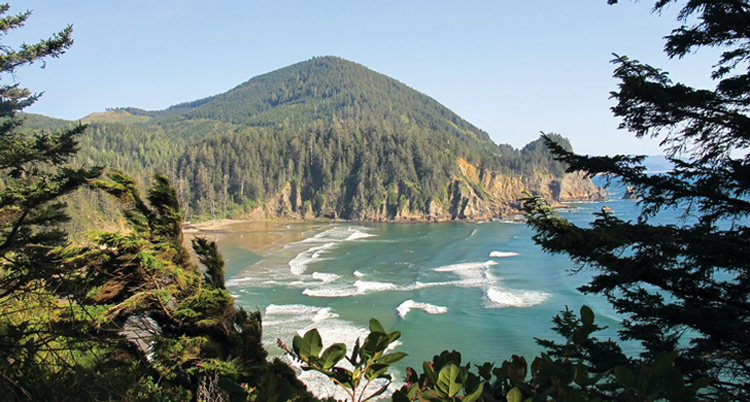 Extending along 4 miles of coastline, Oswald West State Park is a massive, 2,484-acre park with a variety of options for outdoor recreation and easy beach access. Considered one of the best parks in the state, the park is popular for surfers, hikers and beach goers alike. A 13-mile stretch of the Oregon Coast Trail weaves through Oswald West State Park, in addition to Cape Falcon and Neahkahnie Mountain, which each offer great hikes overlooking the ocean. Park in one of the four parking lots located along Highway 101 to access the park, then start your hike — or head straight to the beach. After just a half mile walk through the woods from the main parking lot, Short Sand Beach is tucked away in a cove surrounded by trees, volcanic basalt and sandstone cliffs.

History: Oswald West State Park was obtained between 1931 and 1976. The park was once named Short Sand Beach but was renamed Oswald West State Park after Oswald West, the 14th governor of Oregon who led the efforts in preserving the shoreline of Oregon for public use. At the trail divide between Short Sands Beach and Cape Falcon, there is a memorial marker for Matt Kramer, a journalist for the Associated Press who wrote articles that helped shift public opinion about preserving beaches.

Have fun exploring all that the scenic Oregon Coast has to offer. And let us know about your favorite park near Cannon Beach!

While you can crab along the Oregon coast all year long, most locals will tell you that the fall is the best time to go. Beginning in September, crabs will tend to be more “filled out” and there will be a...
October 22nd  |   Cannon Beach, Neighborhood Insight
7 Crabbing Tours to Take Near ...
From hotels offering ghastly pasts to a supernatural roadside attraction, our Oregon and Southwest Washington communities are filled with stories of real-life hauntings. To celebrate the season, we ...
October 13th  |   Cannon Beach, Central Oregon, Hood River, Neighborhood Insight, Portland, Southwest Washington
10 Real Haunted Places to Visi...