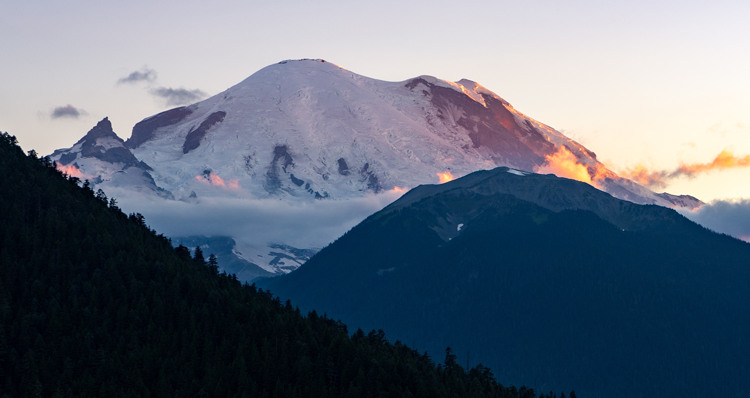 Extending from the vast Pacific Ocean to the west all the way to the Cascade Mountain Range to the east, the Pacific Northwest is dotted with a number of majestic mountain peaks. Each of these iconic mountains provide endless opportunities for outdoor recreation, especially during the winter and early spring! And of course, these mountains offer some of the most jaw-dropping views of surrounding scenery.

Take a look at some of the best mountains in the Pacific Northwest, extending from Mount Baker near the Washington-Canada border, all the way to Mount Thielsen in Southern Oregon. Add these towering mountains to your bucket list if you haven’t yet seen them first-hand! 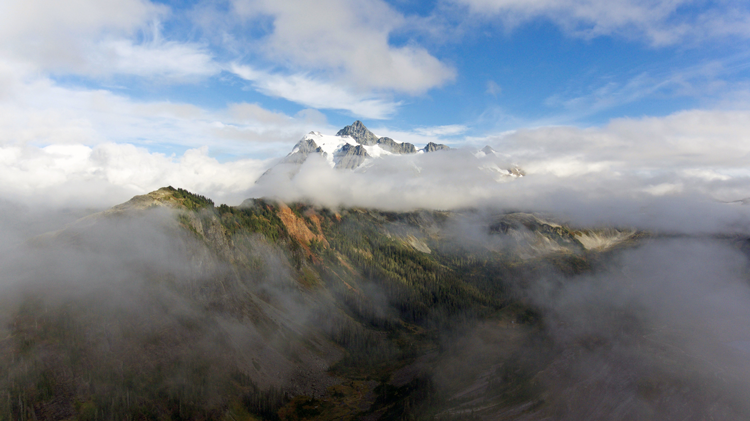 Situated about 52 miles east of Bellingham, Mount Baker is one of the snowiest places on earth. In fact, statistically speaking, Mount Baker is the second-most heavily glaciated of the Cascade Range volcanoes, and the volume of snow and ice on the mountain is greater than that of all other Cascade volcanoes combined. These conditions make Mount Baker an excellent place to ski and snowboard. Mount Baker Ski Area attracts thousands of skiers between late November and late April. The resort is known for its record-breaking season in 1999, when the mountain received a record 1,140 inches of snowfall in a single season.

During the summer, visitors may head to the Mt. Baker-Snoqualmie National Forest surrounding the ski area for hiking, camping and an interpretive center. Head to the Heather Meadows Visitor Center to embark on an enjoyable summer hike. And don’t miss Heather Meadows Café, open in the summer for visitors to stop in for fresh local food and beverages before or after visiting the nearby hiking trails or taking in the scenic views of the surrounding peaks. 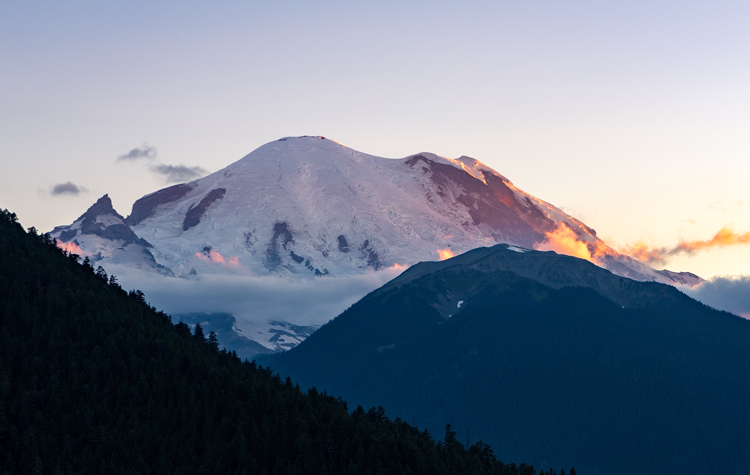 Mount Rainier is a massive, active stratovolcano situated about 60 southeast of Seattle. With a summit elevation of 14,411 feet, it is the highest mountain in the state of Washington and the entire Cascade Range. It is also considered one of the most dangerous volcanoes in the world because of its large amount of glacial ice that has the potential to produce massive lahars.

While only about 8,000 experienced climbers complete the three-day climb to the top each year, the volcano is surrounded by a number of hiking trails that appeal to hikers of all skill levels and abilities. Plus, Mount Rainier is popular during the warmer months for mountain biking, camping, fishing, horseback riding and more — plus skiing, snowboarding, snowshoeing and snowmobiling during the winter. With year-round beauty and diverse terrain, there’s nearly no outdoor activity you can’t do at Mount Rainier. 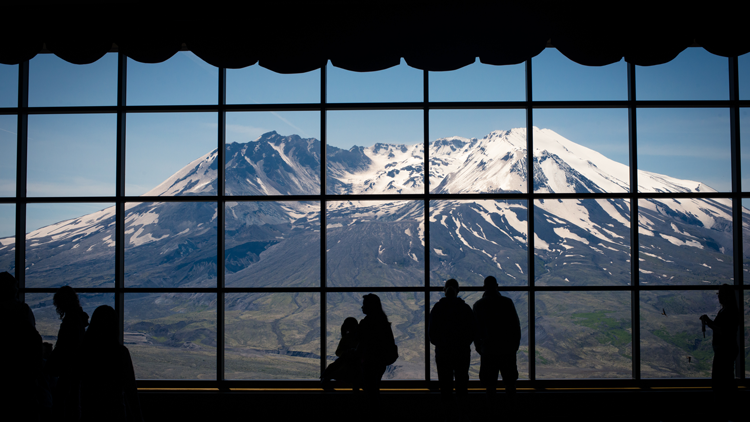 Most known for its destructive eruption on May 18, 1980, Mount St. Helens is an active stratovolcano situated in Southwest Washington about 60 miles northeast of Vancouver. Visitors travel from all over the country to witness this popular mountain at the Mt. St. Helens Visitor Center, which explains the full story of this fascinating volcano. The Johnston Ridge Observatory offers some of the clearest views of the volcano, with several viewpoints along the way.

Get an even more up-close-and-personal look at Mount St. Helens by climbing it! The hike up the mountain is difficult but requires no technical climbing skills and is open almost-year round. There are plenty of hikes traveling up and around this majestic peak, which reaches an impressive elevation of 8,363 feet. Climbers must attain a permit to hike Mount St. Helens; more information can be found here. 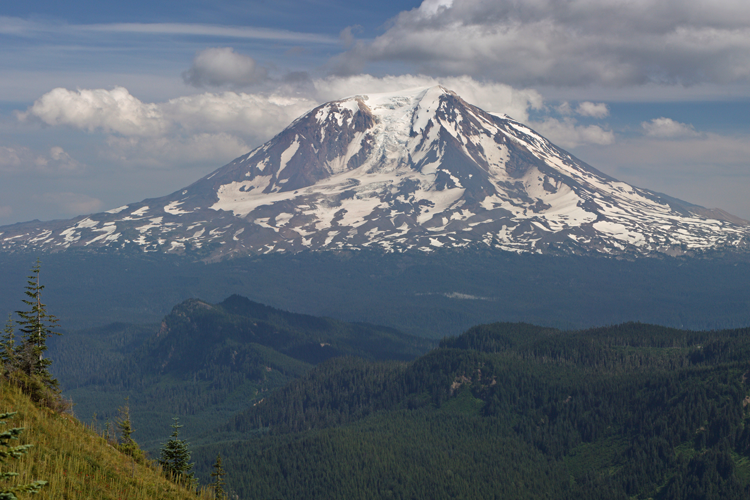 Considered a sister mountain to Mount St. Helens, Mount Adams is a potentially active stratovolcano in the Cascades. With an elevation of 12,281 feet, Mount Adams is the second-highest mountain in the state of Washington, after Mount Rainier. The mountain is open nearly year-round, but due to its higher elevation compared to Mount St. Helens, it offers a slightly more difficult climb. In fact, the climb that requires the least amount of technical expertise, the South Climb, still requires ice axes, trekking poles, and microspikes to summit.

In addition to its advanced hikes, Mount Adams (and its surrounding landscape) is a popular destination for skiing, camping, boating, fishing, rafting, wildlife viewing, and of course — scenic driving. Be sure to check with local rangers before your visit to Mount Adams for information on weather conditions, permits and requisite trip reports. 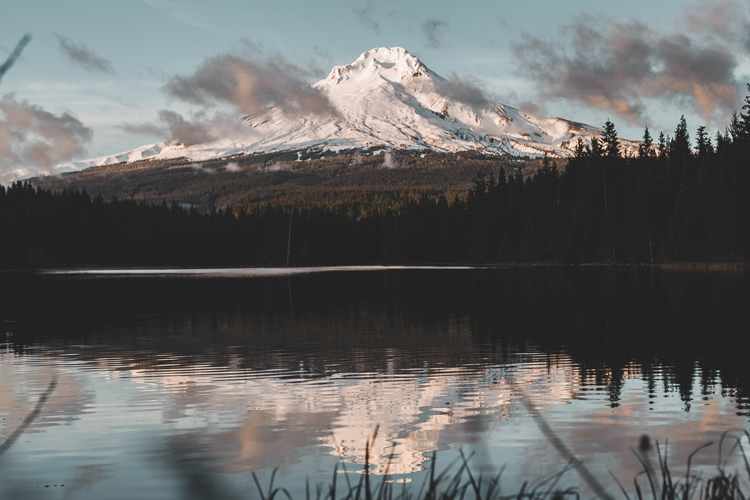 Reaching an elevation of 11,249 feet, Mount Hood is the highest point in all of Oregon and the fourth highest in the Cascade Range. Plus, Mount Hood is one of the most climbed mountains in the world, making it a prominent and must-see mountain for Pacific Northwesterners.

This mountain is made even more accessible due to its year-round skiing and snowboarding at Timberline Ski Area. Stay near the ski area at Timberline Lodge, a mountain lodge situated on the south side of Mount Hood. The lodge is filled with history, dating back to the Great Depression era, when it was built and furnished by local artisans. This National Historic Landmark is perhaps most known as the exterior of the Overlook Hotel in Stanley Kubrick’s The Shining. During your stay, enjoy a myriad of activities, including fishing, whitewater rafting, kayaking, horseback riding, mountain biking and more. 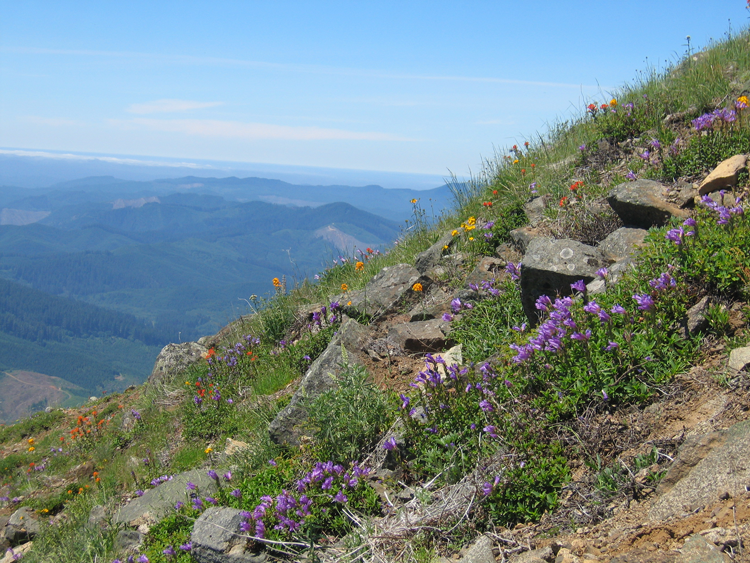 Photo Courtesy of the Trailkeepers of Oregon

At 4,097 feet, Mary’s Peak is the highest peak in the Coast Range — and one of the most scenic and inspiring destinations along the coast. After a reasonable 1.5-mile hike to the summit of the peak, you can take in panoramic views of the Pacific Coast, Willamette Valley, and the Cascade Range. This is also one of the best places to view Glacier Lilies in the spring, followed by wildflowers and butterflies in late June and early July.

Popular activities at Mary’s Peak include hiking, climbing, skiing, sledding, and camping. Fuel up for your day of adventure at Gathering Together Farm, a restaurant and farmstand in the countryside of Philomath, highlighting fresh, exquisite produce at its best. 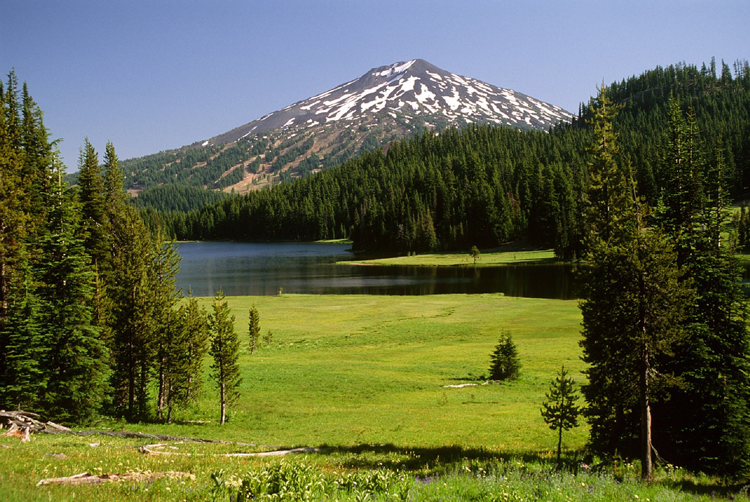 Named Mount Bachelor because it “stands apart” from its nearby Three Sisters, Mount Bachelor is one of our favorite destinations for wintertime fun in Central Oregon. This stratovolcano in Bend is home to the largest ski resort (by area) in the state of Oregon and the second-largest single-mountain ski resort in the country. Skiers and snowboarders enjoy one of the longest ski seasons in the country at Mount Bachelor, which typically extends from mid-November through the end of May.

During the warmer months, Mount Bachelor is a popular destination for mountain bikers. The The Mount Bachelor Bike Park features a variety of popular ski runs transformed into daredevil dirt routes for bikers to explore. The bike park offers lift services to an additional 13 miles of downhill-oriented trails. Plus, summer is ideal for hiking, disc golfing and dining at sunset.

Situated in the Southern Cascades, Mount Thielsen is a lesser-known mountain with no shortage of scenic beauty and opportunity for outdoor adventure. Reaching an elevation of 9,184 feet, Mount Thielsen features a dramatic horn-shaped peak, extending to a steep and pointy spire. This peak is said to be struck by lightning more often than any other High Cascade peak, giving it the nickname “the lightning rod of the Cascades”.

Mount Thielsen is known for its hikes, especially during the summer. While the initial portion of the hike is fairly straight-forward, the final stretch is very steep, requiring much more advanced technical skills that may be too much for casual climbers. If you are a professional climber with the correct equipment, you may reach the summit, offering the only viewpoint outside of Crater Lake National Park where you can see the crystal clear waters of Crater Lake. The most common hike is the Mount Thielsen Trail, a 9.2-mile out-and-back hike that reaches the summit.

That About Summits It Up

What mountains are you dying to visit? Let us know in the comments below!

🫖 We're spilling the tea on some of the best places to sip tea in the city! Portland is a tea drinker’s paradise, as tea houses, tea shops and tea tasting rooms dot the city, from back-alley “speakteasies” to tea houses situated amongst lush Japanese gardens.

The 12 Best Tea Houses in Portland, Oregon — on the blog (link in bio).

📊 In many ways, the worldwide shift to remote work is here to stay — which means our homes are much less tethered to the location of our places of work. You may be dreaming about owning your own vacation home in your favorite getaway destination — one you can visit from time to time (or even for an entire season) and rent out when you’re not there, either on a short-term or long-term basis.

There are several cities and communities in Oregon and Washington with thriving rental markets, due to their popularity for tourists, relative affordability, and other factors. Today on the blog, we're sharing a few you might consider if you’re looking to invest in a rental property in the near future!