Average home sale prices stayed fairly steady in the Portland Metropolitan area this December, with a slight decrease to $466,055 from $467,762 in November.

Nationally, however, the average sale price increased. For comparison, November’s national average was $354,900 (up slightly from October’s average of $354,700), which is still over $100,000 less than what we are seeing in our markets. December’s national averages are not yet out, as the Hasson Company collects its own data to provide you with the most current and relevant market data each month.

Since November, local new listings have fallen by 33.1% and pending homes sales have fallen by 23.5%, but, the percentage of homes sold has increased by 7.3%. This could mean a decrease in inventory of homes in the Portland Metropolitan area. This is a trend that’s happening across the nation, from Seattle to Sioux Falls to Birmingham and is consistent with what the National Association of Realtors® saw during the third quarter of this year and many predict to see into 2017. Although in many of these other cities, the low inventory is driving home price up.

Home inventory has continued to decrease to 1.3 months (down from 1.6 in November), which is still less than the national average of 5.1 months in November. Milwaukie and Clackamas had the most new listings in December, but Southeast Portland took the lead with the most homes sold. 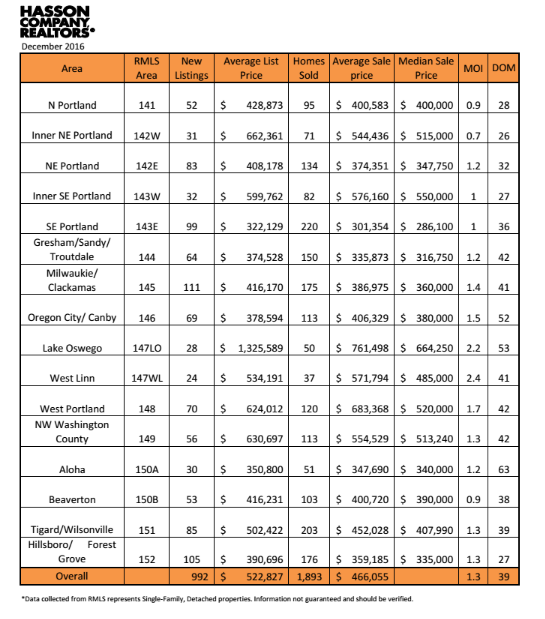 Average home sale prices stayed fairly steady in the Portland Metropolitan area this December, with a slight decrease to $455,194 from $459,596 in November. Nationally, the average sale price decreased. For c...
January 8th  |   Market Trends, Market Update
DECEMBER MARKET SNAPSHOT
To kick off the new year, January’s average home sale price for the Portland Metropolitan area stood at $506,554. This is an 8.7% increase compared to December 2016 and a 17.9% increase compared to the same...
February 7th  |   Market Trends
January Market Snapshot